The ED filed the chargesheet before Additional Sessions Judge Ruby Alka Gupta for consideration and subsequent issuance of summons to the accused including Karti. 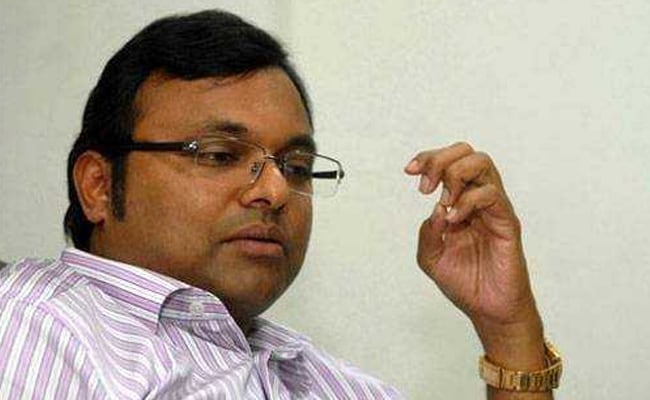 Though the name of P Chidambaram, who was also questioned recently by the CBI and the ED in the INX media and the Aircel-Maxis money laundering cases respectively, was mentioned in the charge sheet, the Congress veteran has not been arrayed as an accused in the probe report which would now be considered by the court on July 4.

The ED filed the chargesheet before Additional Sessions Judge Ruby Alka Gupta for consideration and subsequent issuance of summons to the accused including Karti.

Reacting to the filing of the chargesheet, which is called prosecution complaint in official parlance, P Chidambaram said that it would be "vigorously contested" before the special court.

"The complaint filed by ED against Karti Chidambaram and others is seriously flawed. Since the matter is in Court, I shall not make a public comment. The complaint will be vigorously contested before the Special Court," the former minister tweeted.

The probe agency also made clear that it may file supplementary charge sheets in the case which apparently keeps open the chances of arraying more persons as accused.

Apart from Karti Chidambaram , the agency has also named ASCPL and its directors Padma Bhaskararamana and Ravi Viswanathan, and CMSPL and its director Annamalai Palaniappa in the charge sheet under section 4 (punishment for money laundering) of the Prevention of Money Laundering Act (PMLA).

"Investigation carried out under the PMLA so far as revealed that Karti P Chidambaram is linked with individuals and companies involved in financial transaction and companies holding such companies as per diagram...

"Investigation has revealed that ASCPL and CMSPL are controlled and owned by Karti Chidambaram and his close associate S Bhaskararaman. Investigation has further revealed that ASCPL received money from ATVL, parent company of Aircel Ltd., in close proximity to receipt to FIPB (Foreign Investment Promotion Board)," the charge sheet, filed through advocate AR Aditya, said.

It alleged that Karti Chidambaram received Rs 26 lakh from ATVL in ASCPL, on April 11, 2006, immediately after the approval under the head of payment of consultancy services, it said.

"Similarly CMSPL received an amount of approximately USD 2,02,447 between period 2007-11 against invoices raised between 2007-09. The payments were received from Maxis and its associates in guise of charges for a software which was designed for use by an Indian company and could not at all of any use by a Malaysian company," it said.

The ED had registered the case under the sections of PMLA on February 7, 2012 on basis of an FIR registered by the CBI.

It said that during the investigation it was found that ASCPL was already in financial transaction with the other companies namely Chess Healthcare Care Solutions Pvt LTD, M/s Chess Management Services Pvt LTD (CMSPL) and M/s Halidon Marketing Pvt LTD since the financial year 2005-06.

The agency said that a total of Rs 1.16 crore allegedly belonging to Karti Chidambaram has already been attached by it so far.

The agency mentioned that the former Union minister's son has been linked with various individuals and companies involved in the Foreign Investment Promotion Board (FIPB) approval given to the Aircel-Maxis deal.

It also alleged that Karti Chidambaram was in the process of alienating the property involved in the money laundering in order to frustrate the proceedings under PMLA.

The agency told the court that it might file a supplementary charge sheet in the case.

The court has already granted interim protection from arrest till July 10 to Karti Chidambaram in two cases filed by the CBI and the ED in 2011 and 2012, respectively in the Aircel-Maxis matter arising out of 2G spectrum cases, while his anticipatory bail plea is pending before the court.

Promoted
Listen to the latest songs, only on JioSaavn.com
P Chidambaram has also been granted protection from arrest till July 10 by a court here in the present money laundering case while his anticipatory bail is pending before the court.

The matter pertains to grant of FIPB clearance to M/s Global Communication Holding Services Ltd for investment in Aircel.