Earlier in the day, DK Shivakumar had attacked the BJP saying the party is in a hurry to come to power in the state and is using the Governor of Karnataka for the same. 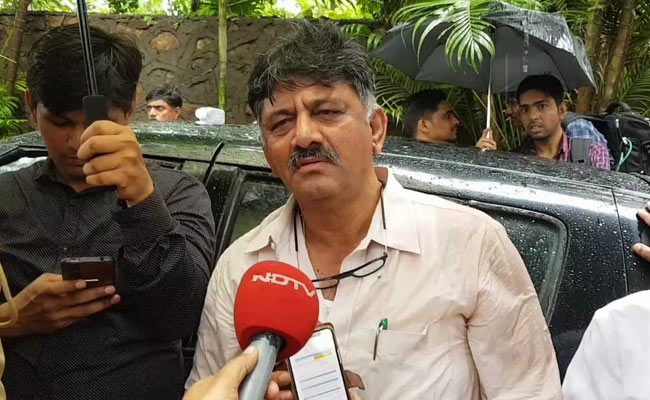 Congress leader and Minister DK Shivakumar said today that Speaker KR Ramesh Kumar has served notice to rebel lawmakers, giving them time till 11 am tomorrow to come and attend the proceedings of the House.

"The Speaker has served notice to rebel MLAs, giving them time till 11 am tomorrow," Mr Shivakumar said.

"BJP is misguiding you. BJP is trying to convince them that they won't be disqualified and they will be made ministers. As per the Constitution of India, you can't be made a member once you're disqualified," he added.

Earlier in the day, Mr Shivakumar had attacked the BJP saying the party is in a hurry to come to power in the state and is using the Governor of Karnataka for the same.

His statement came after the Supreme Court earlier today refused to give an early hearing on a plea by two independent Karnataka legislators seeking a direction to conclude the floor test in the Assembly today.

The Congress-JDS government slumped into a minority in Karnataka earlier this month following the resignation of 16 lawmakers. Thirteen from the Congress and three JD(S) lawmakers have resigned.

On Friday, the Assembly failed to meet two deadlines set by Governor Vajubhai Vala to complete the trust vote.

After that, Chief Minister HD Kumaraswamy moved to the Supreme Court challenging the Governor's directive to the government saying it was in violation of well-settled law laid down by the court.

The state Assembly has 225 members, including one nominated legislator. The halfway mark in the 225-member Assembly is 113.