The people of Karnataka have given a jolt to the people who have spread negative perception about the BJP, said PM Modi

A perception has been created that BJP is a party of Hindi-speaking people, said PM Modi

New Delhi: Describing the BJP's win in Karnataka as "extraordinary", Prime Minister Narendra Modi today said he was overwhelmed by the love and affection he got from the people of the state and that language proved to be no barrier.

"A perception has been created that BJP is a north-India party, a party of Hindi-speaking people. Gujarat isn't Hindi-speaking, nor is Maharashtra, Goa Assam or the Northeast. The people of Karnataka have given a jolt to the people who have spread a negative perception about the BJP," PM Modi told BJP supporters at the party headquarters in Delhi.

Without naming the Congress, the Prime Minister attacked the party for what he called creating a "north-south divide" and stoking tension between the state and the centre.

The remarks comes against the backdrop of controversial moves by the Congress government in Karnataka like having a separate state flag and a proposal to give religious minority status to Lingayats, who have traditionally seen as BJP supporters.

Saluting party workers for their tireless efforts during the Karnataka election campaign, PM Modi tried to boost their morale. "Sweat has a fragrance and that helps the lotus (BJP's election symbol) bloom".

The BJP that emerged the single largest party in Karnataka has staked claimed to form the government. And so has the JD(S) after the Congress extended unconditional support to it.

PM Modi assured the people of Karnataka that the BJP won't lag in its efforts to create a "brighter future" for Karnataka. The party has already sent some of its top ministers to the state where the party is still short of the halfway mark needed to form the government. 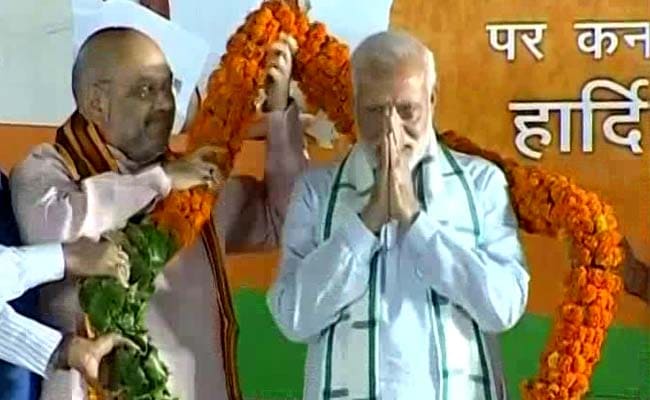 "BJP has won 14 elections. This is the 15th one. We are the single largest party. We are seven seats away from the magic figure," party chief Amit Shah told party supporters.

"You (Congress) had 122 (seats), now down to 77. Your chief minister lost by a margin of 35,000 votes on one seat. Half the cabinet has faced defeat. On what basis are the Congress leaders smiling," asked Mr Shah.

Promoted
Listen to the latest songs, only on JioSaavn.com
Accusing the Congress of trying to play caste politics with its proposal on Lingayats, the BJP chief claimed that the Congress thought only about its vote bank and misused money and muscle power. He also blamed the ruling party in Karnataka for the 10,000 voter cards found in a house in Bengaluru that led to polling being deferred on one seat.

"Even after doing all this, the people rejected you. BJP had 40 seats, now it has 104. We have got 37 per cent of votes. The results are a clear message sent out the voters who believe in democracy," said Mr Shah.