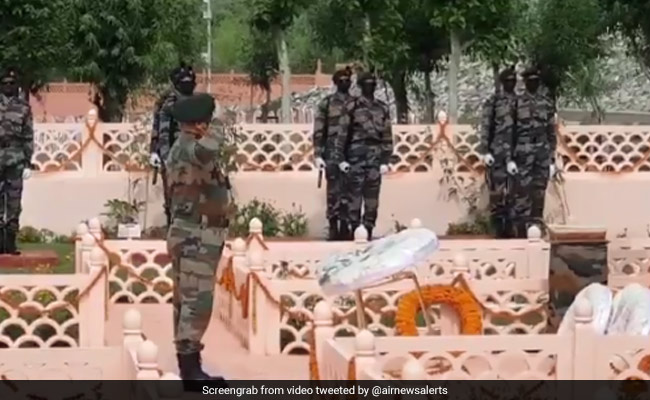 The 22nd anniversary of Kargil Vijay Diwas was held at the Kargil War Memorial, Drass.

The Army paid rich tributes to the soldiers who lost their lives in the 1999 Kargil War against Pakistan at the Drass war memorial in Ladakh on Monday.

In 1999, the Indian armed forces defeated attempts by Pakistan to capture strategic heights in Kargil. It was named ''Operation Vijay'' (victory).

Lt Governor of Ladakh R K Mathur was the chief guest on the occasion. He laid a wreath at the memorial and paid tributes to the killed soldiers as part of a ceremony symbolising ''shraddhanjali'' (homage) from the entire nation.

President Ram Nath Kovind was scheduled to visit the Drass memorial to pay homage to the soldiers who laid down their lives in the war but the plan had to be change due to bad weather.

Instead, he visited the Baramulla war memorial in north Kashmir and laid a wreath there.

In 2019 also, President Kovind's flight could not take off from here due to bad weather and he laid a wreath at the war memorial in Badamibagh Cantonment, which also houses the headquarters of the Army's 15 Corps.

The journey of the ''Swarnim Vijay Varsh Victory Flame'' across the country commemorates 50 years of India's victory over Pakistan in the 1971 war.

It was followed by a wreath-laying ceremony by civil and military dignitaries, he said.

The gallantry awardees of the Kargil War, next of family of the bravehearts, and ''Veer Naris'' also paid tributes to the fallen heroes, he said.