The move comes after Kangana Ranaut attacked pop star Rihanna over her recent post on the farmer protests at the Singhu border in Delhi.

Three tweets by Kangana Ranaut have been deleted in the last two hours.

Some tweets of actor Kangana Ranaut were deleted today by Twitter, which said the posts were in violation of the platform's rules on hate speech.

Three tweets by the actor have been deleted in the last two hours, both related to the farmer protests and the backlash on the world stage after tweets by international celebrities.

"We have taken action on Tweets that were in violation of the Twitter Rules in line with our range of enforcement options," Twitter said in a statement.

The move comes after Kangana Ranaut attacked pop star Rihanna over her recent post on the farmer protests at the Singhu border in Delhi. She also called climate activist Greta Thunberg a "rat" for her comments on the protests.

One of the deleted tweets comments on cricketer Rohit Sharma's post on Wednesday, one of the many tweets by celebrities to deliver a message of solidarity and unity after tweets like Rihanna's flagging the farmer agitation. 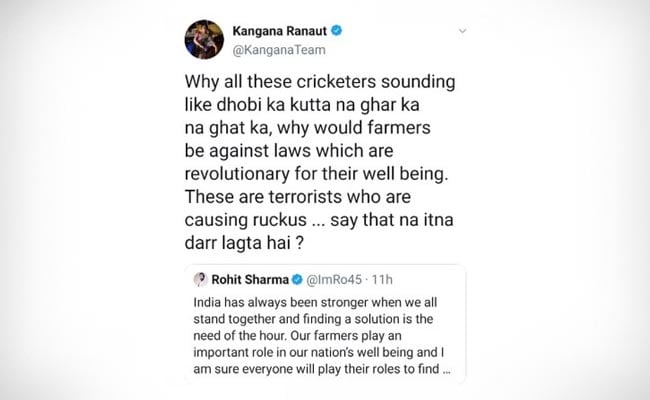 On Tuesday, Ms Ranaut called the farmer protesters "terrorists" and said they were trying to divide India. She also called Rihanna a "fool".

No one is talking about it because they are not farmers they are terrorists who are trying to divide India, so that China can take over our vulnerable broken nation and make it a Chinese colony much like USA...
Sit down you fool, we are not selling our nation like you dummies. https://t.co/OIAD5Pa61a

The actor also raged at a Twitter user who pulled out one of her old tweets apparently appreciating a song by Rihanna.

The Queen star's account was suspended briefly on Twitter in the past after she appeared to call for the beheading of producers of a TV show that she believed was offensive to Hindus.

She also controversially called singer-actor Diljit Dosanjh - with whom she has had ugly and rambling exchanges on Twitter -- a 'Khalistani'.

On Monday, the Ministry of Electronics and Information Technology had ordered Twitter to block accounts over tweets related to "farmer genocide" hashtags.

More than 250 accounts were blocked for tweeting or retweeting with the 'farmer genocide' hashtag, and making "fake, intimidatory and provocative tweets" in connection with the farmer protests. "The use of the hashtag is part of "motivated campaign to abuse, inflame and create tension in society on unsubstantiated grounds. Incitement to genocide is not freedom of speech; It is threat to law and order," the government said.

Twitter followed through and then unblocked the accounts later. Yesterday, the government warned of action if Twitter did not comply with its order.