Kangana Ranaut alleged that the Maharashtra government is targeting her because of her fight with the Shiv Sena.

Actor Kangana Ranaut arrived in Mumbai today to heavy security and an intense battle with the Maharashtra government shortly after scoring a big win against the city's civic body BMC, which had started demolishing alleged illegal structures at her office.

At the airport, a huge crowd gathered to see the actor, defying distancing protocol. Among them were activists of the state's ruling Shiv Sena, holding black flags in protest against her.

A bulldozer was at work at her office, ramming structures, around the same time she took a flight to Mumbai. Just before she landed at the Mumbai airport, the Bombay High Court ordered a stop to the demolition work.

The 33-year-old actor alleges that the Maharashtra government is targeting her because of her fight with the Shiv Sena, which also controls the BMC or Brihanmumbai Municipal Corporation.

"I am never wrong and my enemies prove again and again this is why my Mumbai is POK now #deathofdemocracy," Kangana Ranaut wrote in a series of tweets.

She captioned photos of the BMC team as "Pakistan..." and "Babur and his army".

Babur and his army #deathofdemocracypic.twitter.com/L5wiUoNqhl

In a reminder of her old feud against Bollywood insiders, she also used the term "Bullywood" in a post: "There is no illegal construction in my house, also government has banned any demolitions in Covid till September 30, Bullywood watch now this is what Fascism looks like."

There is no illegal constructiosn in my house, also government has banned any demolitions in Covid till September 30, Bullywood watch now this is what Fascism looks like #DeathOfDemocracy#KanganaRanaut

The BMC had listed 14 "violations" at her office in Mumbai's Pali Hills, which included a toilet apparently built in space marked for a kitchen and an office set up in an area meant for a toilet. A civic official was quoted by Press Trust of India as saying "illegal alterations" at the Bandra bungalow of the Bollywood star would also be demolished.

"As I am all set for Mumbai Darshan on my way to the airport, Maharashtra government and their goons are at my property all set to illegally break it down, go on! I promised to give blood for Maharashtra pride this is nothing take everything but my spirit will only rise higher and higher," Kangana Ranaut tweeted this morning.

The BMC move raised questions like whether the actor had been given enough notice, seeing that she had been out of Mumbai for months, and why no action was taken earlier. The BMC was also called out over the timing of its action, since Kangana Ranaut had announced her date of return last week.

Among those who criticized the BMC was the Sena's ally Sharad Pawar, who said the demolition action had "given the actor unnecessary publicity".

The "Queen" actor, given Y-Plus security by the central government, was escorted by cops as she offered prayers this morning at a temple in Himachal Pradesh on her way to Chandigarh for her flight to Mumbai. 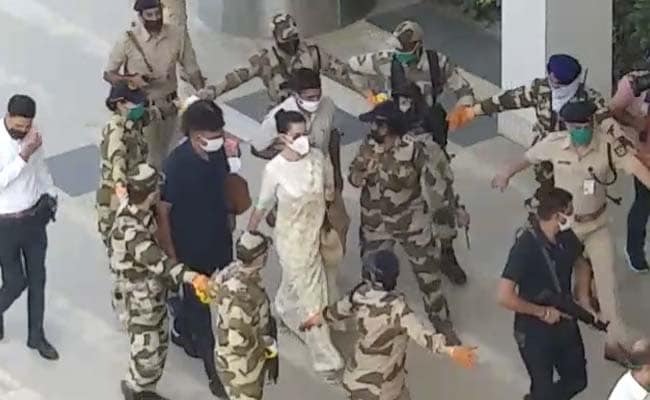 Kangana Ranaut, given Y-Plus security by the central government, was escorted by cops on her way to Chandigarh for her flight to Mumbai.

Her Mumbai return is expected to be as dramatic as her dust-up with Maharashtra's ruling coalition over her criticism of the Mumbai police and administration's handling of the Sushant Singh Rajput case.

Last week, as she commented that she feared living in Mumbai, Sena leaders suggested the actor should stay out of the city. The row escalated when she retorted that "Mumbai feels like PoK" - a comment she repeated today. In a fierce backlash from the Shiv Sena, an MLA threatened that she would be slapped at the Mumbai airport, women protesters hit her posters with slippers and a top Sena leader, Sanjay Raut, was on camera using a slur against her.

Even Chief Minister Uddhav Thackeray took a dig at Kangana Ranaut, saying that people who earned their livelihood in the city were ungrateful.

The Sena accused the ruling BJP at the centre of trying to score political points by giving the actor security.

On Tuesday, Maharashtra Home Minister Anil Deshmukh of the NCP ordered an investigation into the allegations of an actor, Adhyayan Suman, that she "took drugs".