BJP leader Jyotiraditya Scindia also expressed confidence that his party will "win a majority", if not all, of the 28 assembly seats where bypolls will be held on November 3. 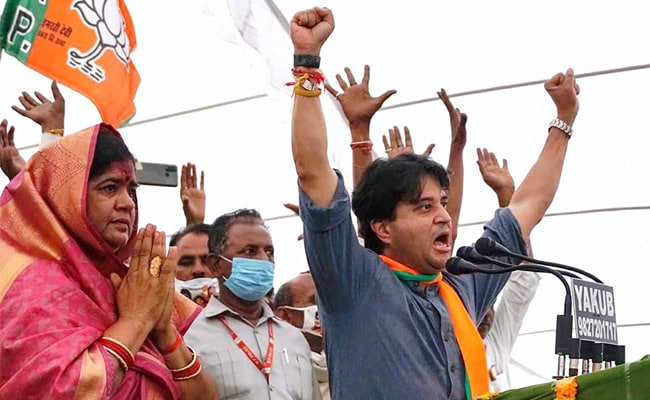 Accusing former chief ministers of Madhya Pradesh Kamal Nath and Digvijaya Singh of being the "biggest traitors", BJP leader Jyotiraditya Scindia said they betrayed voters' trust by running a "corrupt" government and he had to leave the Congress after people's issues raised by him were not addressed despite approaching "every port of call".

He also expressed confidence that the BJP will "win a majority", if not all, of the 28 assembly seats where bypolls will be held on November 3.

By-elections were necessitated after 22 rebel Congress MLAs, loyal to Mr Scindia, resigned from the party in March this year leading to fall of the 15-month-old Kamal Nath government in Madhya Pradesh. Later, three more MLAs resigned and joined BJP, while further three seats fell vacant due to the death of sitting MLAs.

"The Congress needs to win 28 out of 28 seats to be able to even think of coming close to forming the government and they have just lost another MLA (in Rahul Lodhi) who has joined the BJP. It is very clear that people do not have any hope in the Congress party, not only at grassroots, but also in sitting MLAs of the Congress," Mr Scindia said.

"I do not think in any other state you would have seen MLAs in such a large number -- almost about 30 per cent -- leaving. It very clearly shows the lack of trust and faith in the state leadership of the Congress party which is Kamal Nath and Digvijaya Singh, and who are in a partnership," the Rajya Sabha MP said.

Asked about the Congress campaign narrative of betrayal and being called "gaddar" (traitor) by Congress leaders during canvassing, Mr Scindia said it is not a term that he normally uses in politics as he believes that there must be a certain level in politics that should be adhered to.

"If they indeed are using that term then the biggest gaddars (traitors) in Madhya Pradesh are Kamal Nath and Digvijaya Singh who have been 'gaddars' towards seven and a half crore people because none of the poll promises were fulfilled, they were busy in rent-seeking activities and holding on to power and chair rather than serving the people of the state," Mr Scindia said.

Mr Scindia said the remark was directed at a woman who has risen from the grassroots-level, fought a sarpanch election, became MLA three times and was a Cabinet minister in the Kamal Nath government.

"To top that, he calls a woman and that too a Dalit woman 'an item', which speaks of his mentality towards both women and Dalits," he said.

"What is very sad is that he has not been alone in this. He has been followed very arduously by the former leader of the opposition Ajay Singh who in a statement said 'Imarti should be made into a Jalebi after the election'," he said.

"This shows the attitude of the Congress party towards women and scheduled castes. If Baba Saheb Ambedkar was alive today, he would be very deeply grieved and pained," Mr Scindia said.

Kamal Nath has maintained he did not say anything disrespectful. Asked if like Arjuna of Mahabharata, he feels any dilemma in taking on people with whom he was close to and fought together, Mr Scindia said he is fighting for the cause of the people of Madhya Pradesh and for their well being.

Mr Scindia said he is willing to do whatever it requires to fulfil the aspirations of people, and if it "entails sometimes fighting with those with whom you have worked for over 20 years, so be it".

"I tried to change the way the (Kamal Nath) government was functioning for 15 months, I went to every single port of call that one can to try and address these issues, but when they lay unaddressed, what option was I left with," the former Union minister said.

Mr Scindia said when the Congress came to power, aspirations of citizens of the state rested squarely on the shoulders of Kamal Nath, but he ran a "corruption-riddled government during the span of 15 months".

Accusing the Nath government of indulging in corruption in numerous areas from "sand mining to liquor mafia", Mr Scindia said the Congress dispensation "literally ridiculed and belittled" the aspirations of the people.

"Not fulfilling any of the election promises left me no options but to look for a better governance mechanism for the people of the state. I firmly believe that the Shivraj Singh government would be able to provide that to the people under the leadership of Prime Minister Narendra Modi and party president JP Nadda and Home Minister Amit Shah," he said.