The actor-politician, who has been critical of both the DMK and AIADMK, is fighting on the plank of corruption and good governance. 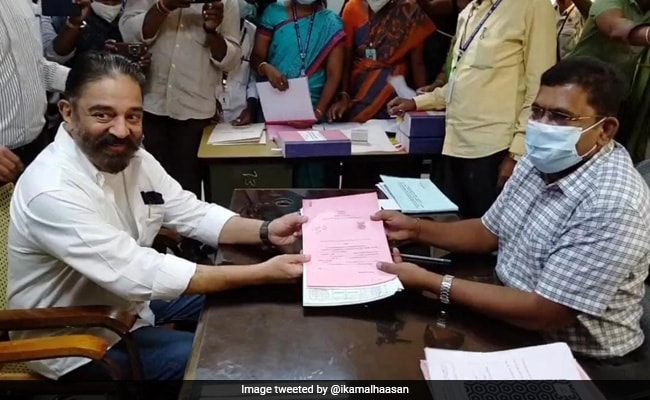 Kamal Haasan said he chose Coimbatore to contest the elections since it was close to his heart.

Makkal Needhi Maiam (MNM) founder Kamal Haasan on Monday filed his papers from Coimbatore South constituency for the April 6 Tamil Nadu Assembly polls, where he will be taking on the BJP and Congress.

Though Mr Hassan floated his MNM in February 2018, he had not contested any elections but fielded candidates for the 2019 Lok Sabha polls in Tamil Nadu, where the party got over 3.75 per cent votes.

Mr Hassan, the chief ministerial candidate of his MNM-led three party alliance, filed his nomination before the returning officer in Central Zone office this afternoon.

The constituency is represented by AIADMK's Amman K Arjunanan in the outgoing Assembly and the ruling party MLA has shifted to Coimbatore North to accommodate alliance partner BJP's Vanathi Srinivasan.

The actor-politician, who has been critical of both the DMK and AIADMK, is fighting on the plank of corruption and good governance.

He said though there were 234 constituencies in Tamil Nadu, he chose Coimbatore to contest the elections since it was close to his heart.

Besides, some vested interests were trying to foment communal trouble in the city, he claimed, adding, his party wanted to thwart such attempts.

When asked if an ''outsider tag'' will affect his chances, Mr Haasan said there was no such thing against him and that it could be a creation of some media or those linked to certain political parties.

Asked about his priority for the constituency, he said there were many projects which remained unfulfilled like roads, drinking water supply and also the Airport expansion.

"I want to make Coimbatore a model city not only at the Indian level but at the international level," Mr Haasan added.

"Politics is not my profession like others. Politics is my duty, with honesty," he said.