Punjab minister Navjot Singh Sidhu's hug to Pakistan's army chief during his visit to Pakistan for the swearing-in of Prime Minister Imran Khan in August had stirred up a storm back home. The gesture could have been avoided, many said, but Mr Sidhu had played it down saying it was just a "jhappi" (hug). The cricketer-turned-politician, who is again travelling to Pakistan for the ground-breaking ceremony of Kartarpur Sahib corridor, reiterated that it was just a hug and "not the Rafale deal", which has been the focus of corruption allegations against Prime Minister Narendra Modi by the Congress.

"It was a second-long hug, not a Rafale deal. It's very common in Punjab. When two Punjabis meet, if they want to express gratitude, they hug each other emotionally. It is a way to show warmth and affection," Mr Sidhu told reporters in Lahore.

But his response left many wondering "why would you thank the Pakistan army chief".

The BJP shot back at Congress for "carrying the Rafale campaign through Sidhu to Pakistan". "Insanity is contagious. Sidhu carries Rahul Gandhi's falsehood against Rafale purchase to Pakistan. He found allies there," said a tweet on the BJP official handle.

Another tweet said, "Snide remarks against Indian government. Pakistani PM is described as a farishta. Have we heard of Trojan Horses?"

Mr Sidhu's decision to attend the ground-breaking ceremony had already upset his boss Amarinder Singh, who had turned down Islamabad's invite over terror attacks in Pathankot and recently Amritsar.

Punjab Chief Minister Amarinder Singh allowed his minister to go to Pakistan, but not without criticising Mr Sidhu's "way of thinking".

"The man (Sidhu) should understand that our soldiers are being killed every day. My own regiment lost one major and two jawans a few months ago," Captain Singh had said.

But Mr Sidhu defended his decision saying "religion unites and it should not be seen through the eyes of politics".

"The centre hasn't objected to my visit, nobody said kintu, parantu (ifs and buts). In fact I was encouraged to go. I have come here as a messenger of peace. This is an opportunity to erase enmity between the two nations," the Congress leader said.

Foreign Minister Sushma Swaraj, who was also invited to attend the ceremony, has instead sent two of her colleagues -- union ministers Harsimrat Kaur Badal and Hardeep Singh Puri. 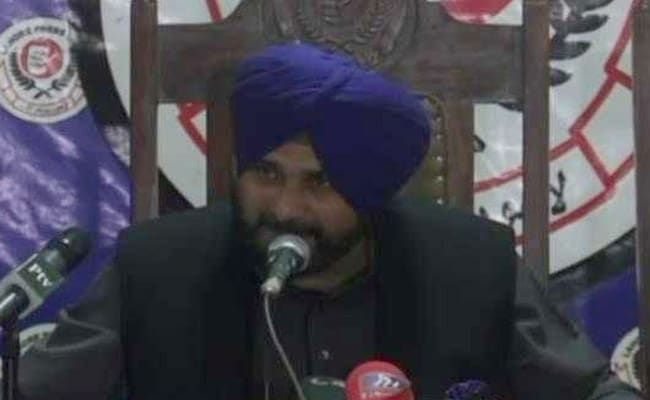 Navjot Singh Sidhu was received at the Wagah border by Pakistan officials this afternoon.

Terming Kartarpur as a "corridor of infinite possibilities", Mr Sidhu said that such initiative would also enhance connectivity and promote trade. The four-km link will provide visa-free access to the Indian Sikh pilgrims to the gurdwara.

Mr Sidhu, who crossed the Attari-Wagah border this afternoon, credited Pakistan's Prime Minister Imran Khan for "making the corridor possible" and said, "The wait of 73 years is over. The seed Imran Khan had sown three months ago has become a plant. It is a happy moment for the Sikh community."

Kartarpur Sahib, where Guru Nanak is believed to have spent the last 18 years of his life, is situated in Narowal district of Pakistan's Punjab province. For many years now, Sikh devotees have been demanding that governments of both the countries to build a corridor linking it with the Dera Baba Nanak in Punjab's Gurdaspur district.

The centre approved the corridor last week and sent a communique to the Pakistan government, urging it to reciprocate.