Eknath Khadse has been critical of Devendra Fadnavis ever since he was forced to resign as revenue minister of the erstwhile BJP government in 2016 over land grab and other allegations. 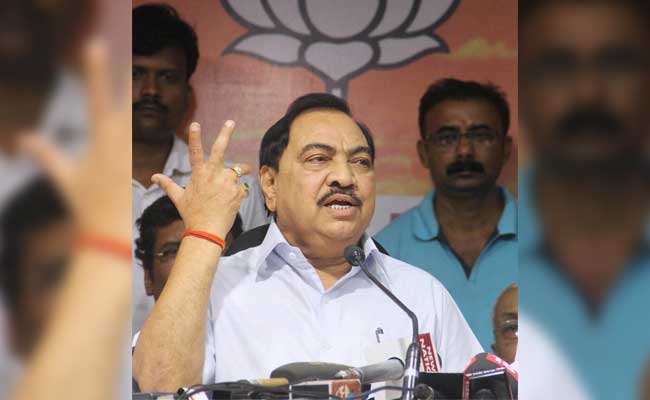 Eknath Khadse was speaking during a function at Jalgaon in north Maharashtra. (FILE)

In a veiled attack on Maharashtra BJP leader Devendra Fadnavis, his senior party colleague Eknath Khadse on Wednesday said that some people, who joined politics only 15 years ago, were now trying to teach politicians like him.

He was speaking during a function at Jalgaon in north Maharashtra on the occasion of his 68th birthday.

"When BJP-Shiv Sena contested the 2014 state assembly elections separately, our efforts helped the party (BJP) come close to absolute majority. However, those who came into politics in the last 15 years are now trying to teach us," he said.

"People certainly did not like the assertion of 'I will come back'," Mr Khadse said.

During the assembly elections held in October last year, Mr Fadnavis, who was then the chief minister, had repeatedly used 'Mi punha yein' (I will come back) slogan as part of his poll campaign.

The BJP and the Sena, which had fought the 2019 state polls in alliance, had secured a comfortable majority by winning 105 and 56 seats respectively.

The Sena, however, broke its three-decade-long ties with the BJP after the latter declined to share the chief minister's post. The Sena finally joined hands with the NCP and Congress to form the Maharashtra Vikas Aghadi government with Sena president Uddhav Thackeray as the chief minister. Mr Khadse has been critical of Mr Fadnavis ever since he was forced to resign as revenue minister of the erstwhile BJP government in 2016 over land grab and other allegations.

"Several party workers and leaders are disappointed and angry over the injustice meted out to me. I think their feelings can explode any time," the prominent OBC leader said.

I have been a staunch supporter and loyalist of the BJP since the last 40 years, Mr Khadse added.

"The party does not have enough numbers to stake claim for government formation in Maharashtra. A small defection will not work, but an entire party should merge into the BJP.

Only then it is possible for our party to come to power in the state. I think it is a naive hope at this moment," he said.