"Complete Breakdown Of Trust": Why JNU Deadlock May Not Be Resolved Soon

The Vice Chancellor must be removed, say JNU students, accusing him of failing to protect them during the attack by masked goons on campus armed with iron rods, sledgehammers and sticks, which left over 30 injured. 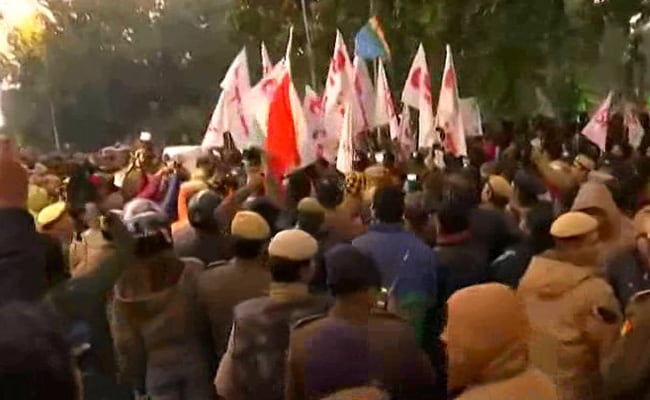 The JNU students are demanding the removal of Vice-Chancellor M Jagadesh Kumar.

The crisis at the Jawaharlal Nehru University (JNU) in the aftermath of a masked mob attack last Sunday may not have an easy solution, officials at the Human Resources Development ministry told NDTV after meeting the faculty and students of the university on Thursday. JNU students, led by union leader Aishe Ghosh, met the officials as part of a protest march last evening that ended in a police lathicharge.

The students, whose march was joined by the faculty and activitsts, decided to move to Rashtrapati Bhavan and meet President Ram Nath Kovind after ministry officials suggested talks with Vice Chancellor M Jagadesh Kumar.

The Vice Chancellor must be removed, say students, accusing him of failing to protect them during the attack by masked goons on campus armed with iron rods, sledgehammers and sticks, which left over 30 injured.

Support for this demand came from a member of the ruling party -- BJP veteran Murli Manohar Joshi, who was the minister for Human Resources Development in the government led by Atal Bihari Vajpayee.

In a tweet, Mr Joshi said: "Reports are, that the HRD ministry had twice advised the JNU, VC, to implement certain reasonable and working formula for resolving the issue of enhanced fees in JNU. He was also advised to reach out to the teachers and students. It is shocking that the VC is adamant for not implementing the government proposal. This attitude is deplorable and in my opinion such a VC should not be allowed to continue on this post."

After meeting the teachers and students, Amit Khare, the secretary of Higher Education, told NDTV: "During our long discussion, I told them that in any campus, there can be difference of opinion and it can be discussed. But when violence takes place over it, it becomes a matter of great concern. Whatever communication gaps are there, whatever grievances are there -- of the students and teachers -- I said tomorrow I would meet the Vice Chancellor. I told the students that their delegation can meet him at 3 tomorrow (Friday)."

Unhappy with the suggestion, the students decided to march to the President's house.

"The students are adamant about the Vice Chancellor's removal. There seems to be a complete breakdown of trust," an official told NDTV. "Ideally, instead of ministry officials, the Vice-Chancellor should have been holding talks with students. But by refusing to meet even the injured students, he has lost the trust of a big section of students".

The students, the official said, are now in no mood for a climbdown on their demand for his removal. "But the government says right now, this option is not under consideration as the students' demands are just increasing," he said.

The problem, the officials said, has been compounded the Delhi police inaction. Though the police were present on campus during the attack, "for reasons best known to them, they didn't arrest a single guy", they said.

Those present at the premier university during Sunday's attack, alleged that the police stood by as masked goons, armed with sticks and iron bars, beat up students and teachers.

"So now, the arrest of those responsible for the attack has to be accompanied by action against the Vice-Chancellor and all these have to be supplemented by withdrawal of the fee hike, which was the root cause of the entire problem," the official said.

Since Sunday, other premier institutes like IITs, IIMs and apolitical institutions like Kolkata's St Xavier's College and Delhi's St Stephen's have expressed solidarity for JNU students.