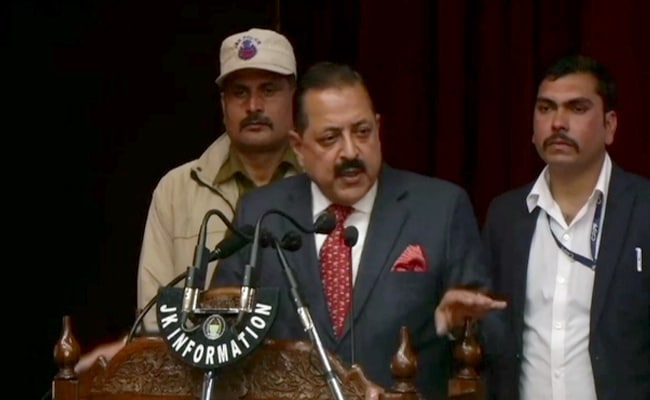 Jitendra Singh said the government has introduced technology in every Indian household. (File)

Science and Technology Minister Jitendra Singh today asked surveying authorities to adopt integrated technology and called upon the National Surveying and Mapping Agency (NMA) to reorient itself to the contemporary needs of the country.

He also asked the surveying authorities to come out of silos and work in close coordination with other related departments like Indian Space Research Organisation (ISRO), India Meteorological Department (IMD), and ocean technology in the Ministry of Earth Sciences in order to be able to produce more fruitful and cost-effective outcomes.

During a visit to the NMA's national headquarters, Mr Singh said the Survey of India has a legacy that dates back to 250 years.

He recalled that it was established in 1767 with the mandate to explore the country's domain and provide base maps for expeditious and integrated development.

Mr Singh said ever since PM Modi took over as Prime Minister in 2014, there has been a giant leap in India's technological approach which also has a bearing on the manner in which the process of survey is conducted. Therefore, it is the responsibility of everyone to live up to the era of new technological innovations initiated and introduced in the last seven years, he added.

The minister issued instructions for holding a joint meeting of the officials of the National Surveying and Mapping Agency with representatives from all the science ministries and departments to pursue initiatives through a joint task force.

Mr Singh said for the first time the government has introduced technology in every Indian household and extended its applications for the benefit of the sectoral sector, development projects as well as for the common citizens.

With the integration of different scientific innovations and a huge jump in our technological advancement, he said, the responsibility today is to promote the use of geo-spatial knowledge and intelligence, not only in the conducting of surveys but also through partnerships and mechanisms which could involve all stakeholders as well as all sections of society.

Mr Singh reviewed the progress made after PM Modi's government had taken a decision of acquiring and producing geo-spatial data and geo-spatial services including maps.

This, he said, was aimed at collecting, generating, preparing, disseminating, storing, publishing, updating and digitalising the geo-spatial data and maps within the territory of India, with greater ease for individuals, organisations, companies, government agencies and other concerned stakeholders.

The Survey of India will have to reorient itself faster than possible, the minister said, adding there are no other options than to this.