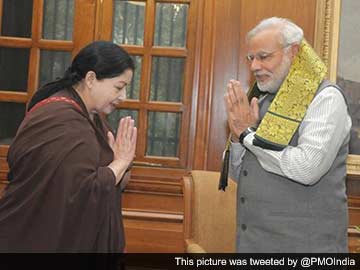 New Delhi: Tamil Nadu Chief Minister J Jayalalithaa had praise for Prime Minister Narendra Modi after a meeting with him in Delhi today, but has denied that there is any proposal for her party the AIADMK to join the BJP-led National Democratic Alliance government at the Centre.

She was also non-committal when asked if her party would support Mr Modi's government in Parliament pointing out that he has a majority in the Lok Sabha and does not need her support. On support in the Rajya Sabha, where the NDA is in a minority, the Tamil Nadu chief minister said, "We will see if the need arises."

Ms Jayalalithaa, who is known to share a good rapport with Mr Modi, said the Prime Minister "is very receptive and listened to issues... the meeting was resourceful and rewarding."

"He was Chief Minister and he understands the problems of a state, he promised he will do the needful," Ms Jayalalithaa said, about a number of problems related to her state that she raised with the PM.

This was the first time that the two leaders met after Mr Modi was sworn in last week. Ms Jayalalithaa skipped the oath ceremony to protest against the presence there of Sri Lankan president Mahinda Rajapaksa, who is accused by parties in Tamil Nadu of war crimes.

Today's meeting came amid much speculation that the ruling BJP is discussing a possible alliance with Ms Jayalalithaa, whose party has 10 Rajya Sabha members and is the third largest party in the Lok Sabha with 37 MPs.

While the BJP has 282 MPs in the Lok Sabha, a clear majority on its own and 336 along with its allies, it has just 42 members in the 245-seat Upper House, and 64 along with NDA allies.

To push legislation through the upper house it will need the support of 123 members.

The closely watched meeting today, which lasted 50 minutes, was postponed for a few hours because of the death this morning of union minister Gopinath Munde after a road accident in the capital. Mr Modi visited the BJP headquarters this afternoon to pay his respect to his party's senior leader.

Promoted
Listen to the latest songs, only on JioSaavn.com
Mr Modi had yesterday met Odisha chief minister Naveen Patnaik who, like Ms Jayalalithaa, is a regional powerhouse and swept his state in the general elections, winning 20 of 21 seats. He has four Rajya Sabha MPs.