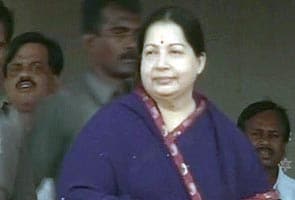 Chennai: AIADMK chief Jayalalithaa has the rubbished reports that her party would have an alliance with the Congress for the coming Assembly polls in Tamil Nadu.

Speaking to reporters in Chennai, Jayalalithaa said that her offer of support to the UPA government during the 2G Spectrum scam crisis was not for alliance with the Congress.

Asked why she had started criticising the Centre of late, she said, "The AIADMK has never hesitated to voice its criticism whenever the Central government took any action against public interest."

On the electoral alliance for the Assembly polls, she said talks were going on with other parties and would come out with details soon.

She did not name any party.

During the DMK rule people have got fed up with the power shortage and the "deteriorating" law and order, she alleged.

"People want a change and AIADMK will come to power and will provide economic prosperity to the state," she said.
Comments
JayalalithaaAIADMKTamil Nadu Assembly polls