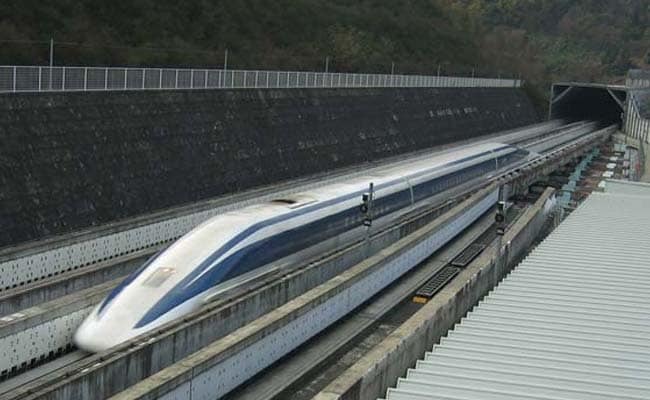 The cost of the 505-km-long corridor is estimated at just under Rs 100,000 crore ($15 billion). (Picture for representational purposes only)

New Delhi: A deal on fast trains was a likely key component of Prime Minister Shinzo Abe's three-day India visit that commenced today with Tokyo having agreed to loan over three-fourths of the project cost of the first Bullet Train, estimated at $15 billion, parliament was informed.

"The Government of Japan has given an assistance package proposal for Mumbai-Ahmedabad high speed rail project involving financial assistance to the tune of 81 per cent of project cost as loan," Minister of State for Railways Manoj Sinha told the Rajya Sabha in a written reply.

"A joint feasibility study for the Mumbai-Ahmedabad high speed corridor, co-financed by Indian Railways and Japan International Cooperation Agency (JICA) has been completed in July 2015," Mr Sinha said in reply to another question.

"No other country has offered such support for the project."

A joint feasibility study for the project was jointly conducted by the Indian Railways and Japan International Cooperation Agency in July this year. The cost of the 505-km-long corridor is estimated at just under Rs 100,000 crore ($15 billion).

This apart, the corridor was also studied by the state-run RITES (Rail India Technical and Economic Service) and Systra of France, along with Italfer of Italy, in 2010. A business development study for Mumbai-Ahmedabad was also done by SNCF of the French Railway in 2014.

In this budget, Rs 65,000 crore has been allocated for high-speed rail and elevated corridor.

The Ministry of Railways has decided to entrust the work of implementation of all high-speed rail projects to two state-run companies -- Rail Vikas Nigam Ltd and High Speed Rail Corp of India Ltd.

The government has also identified feasibility studies for six other similar projects -- Delhi-Mumbai, Mumbai-Chennai, Chennai-Kolkata, Kolkata-Delhi, and two diagonals that intend to cover the Delhi-Chennai and Mumbai-Kolkata routes.

The Indian Railways had intended to follow a two-pronged approach on high-speed train system -- step up the speeds of existing segregated passenger corridors on trunk routes to 160-200 km per hour and identify intercity routes for corridors to cater to speeds of up to 350 km per hour.