Jammu Ropeway Project Launched, 25 Years After It Was Planned

GC Murmu and his wife Smita Murmu inaugurated the much-delayed project and took the first ride on the ropeway along with other top officials. 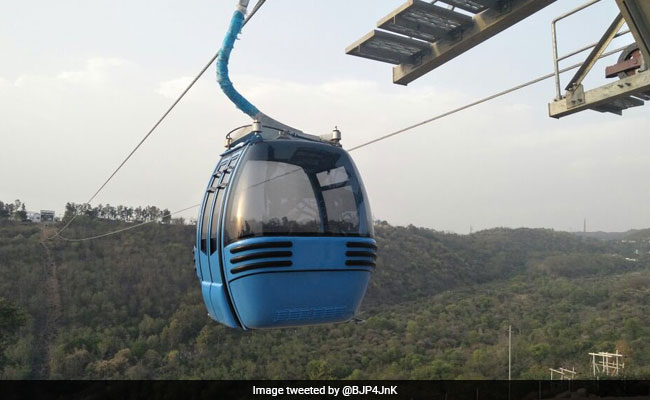 The much-awaited Jammu ropeway project, aimed at boosting tourism in the winter capital of the Union territory, was launched by Lieutenant Governor GC Murmu today.

Planned back in 1995, the project faced dozens of delays in its start, execution and date of completion. However, the people of Jammu are now happy that a prestigious project has seen the light of day after 25 years.

Mr Murmu and first lady Smita Murmu inaugurated the much-delayed project and took the first ride on the ropeway along with other top officials.

GC Murmu said the project would go a long way in promoting tourism in the Jammu region, giving a fillip to the local economy by creating jobs.

He said the project is of great importance and is going to be the biggest tourist attraction (in Jammu) in the coming days. "It was following a personal intervention by the L-G that the project has been thrown open to the general public and tourists today. The L-G had directed us to complete the work and make it operational," an official said.

Initially, the project was to be operated from Bahu Fort to Mubarak Mandi Complex when it was proposed back in 1995. It was modified and the route relocated when both places were declared protected monuments.

The officials said the cable car corporation had successfully conducted the trial run of the first phase of the project in April last year.

The 1.66-km-long cable car project has two phases, first from Bahu Fort to Mahamaya Park and second from Mahamaya to Peer Kho over the Tawi river, with a total length of 1,118 metres.

The cable car project will provide people a high-quality tourism experience with transportation facility, sightseeing and entertainment, they said.

With regard to safety of the project, all standard operating procedures have been adopted as per international standards, they added.

They said the estimated cost of the project is Rs 75 crore, out of which 95 per cent of the total cost has been incurred so far.

"We are very happy that this project has seen light of day after 25 years after its beginning. Thanks to Murmu sahib that the prestigious project has been launched today", Ravinder Singh, a Bahu Fort resident, said.