Ropeway Project In Jammu Likely To Be Completed By Year-End

The 1.66-km-long cable car project has two phases, first from Bahu Fort to Mahamaya Park and second from Mahamaya to Peer Kho over the Tawi river, with a total length of 1,118 metre. 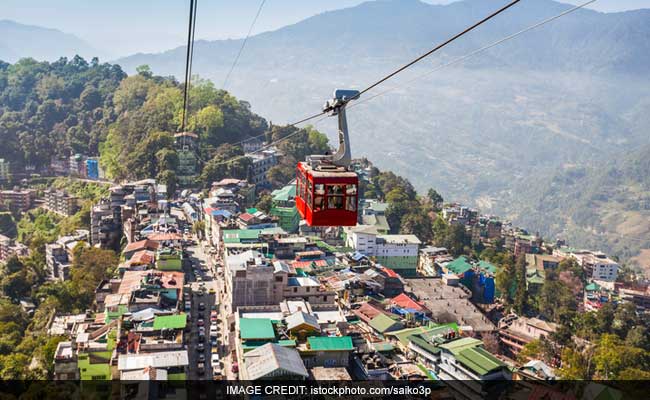 Jammu ropeway project, planned to boost tourism in the winter capital, is likely to be completed by the end of this year and thrown open to public after missing a number of deadlines, the officials said on Sunday.

The 1.66-km-long cable car project has two phases, first from Bahu Fort to Mahamaya Park and second from Mahamaya to Peer Kho over the Tawi river, with a total length of 1,118 metre.

Advisor to Governor, Khurshid Ahmad Ganai, reviewed the progress of the project during his visit to the construction site on Saturday and took a ride from Bahu to Mahamaya, an official spokesman said.

"The project is of great importance and going to be the biggest tourist attraction (in Jammu) in coming days," Mr Ganai said and asked the concerned authorities to speed up the work to complete the remaining project well in time so that it will open by the end of this year.

He said the cable car project would provide people a high-quality tourism experience with transportation facility, sightseeing and entertainment.

With regard to safety of the project, all standard operating procedures have been adopted as per international standards, managing director JK cable car corporation, Shamim Ahmad Wani, said.

He said the estimated cost of the project is Rs. 75 crore, out of which 85 per cent of the total cost has been incurred so far.

Ganai said the ropeway project is going to be one of the biggest assets of Jammu.

Planned in 1995, the project was to be operated from Bahu Fort to Mubarak Mandi Complex initially. It was modified and relocated when Mubarak Mandi and Bahu Fort were declared protected monuments.

The cable car corporation successfully conducted the trial run of the first phase of the project in April.

Giving details of the physical achievements of the project, Wani said the work on section one (Peer Kho to Mahamaya) return and drive station have been completed and rope pulling is under progress and shall be completed very soon.