BJP leader Ram Madhav highlighted how Jammu and Kashmir's Gilgit-Baltistan region is strategically important as it connects India with neighbouring Afghanistan and provides a link to Central Asia. He also spoke about Pakistan's illegal occupation of Kashmir. 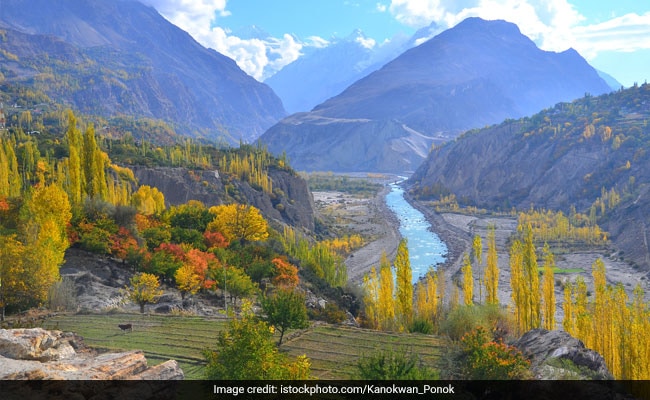 India's stand on Gilgit-Baltistan region of Jammu and Kashmir is valid, legal and much stronger than Pakistan's illegal claim over the occupied territory in Pakistan-occupied Kashmir or PoK, BJP leader Ram Madhav said on Thursday.

Mr Madhav pointed out how Pakistan illegally occupied the region soon after partition, and how two "deceitful" British military officials allowed it to happen.

Mr Madhav highlighted how the region is strategically important as it connects India with neighbouring country Afghanistan and further provides a link to Central Asia.

But due to Pakistan's illegal occupation of PoK, India has been cut-off from Afghanistan.

Instead, China under its Belt and Road Initiative, is now constructing the so-called 'China-Pakistan Economic Corridor' or 'CPEC' which passes through this region in Jammu and Kashmir. This has been strongly opposed by India, Mr Madhav said.

"Our case, as far as Jammu and Kashmir's Gilgit-Baltistan region goes, is even more stronger for the important reason that when (the princely state of) Jammu and Kashmir acceded to India, Gilgit Baltistan was an integral part of the then state of Jammu and Kashmir, under Maharaja Hari Singh," Mr Madhav pointed out.

Ram Madhav was speaking at the launch of a book 'Gilgit-Baltistan and its saga of unending human rights violation'.

Although the region is under Pakistan's illegal occupation currently, India has always maintained that Gilgit-Baltistan is an integral and inseparable part of the state of Jammu and Kashmir, the BJP leader highlighted.

Pakistan, which calls the region as the so-called "Northern Areas", plans to announce Jammu and Kashmir's Gilgit-Baltistan region as its fifth province - a move that is being vehemently opposed by India.

In 1935, with rising Soviet influence and its possible threat to the British Empire in India, Britain sent two of its officers to Gilgit Baltistan. The British later loaned their officers - Major WA Brown and Captain AS Mathieson - to the then Maharaja of Jammu and Kashmir for the purpose of looking after the defence of the Gilgit-Baltistan region. The officers being posted there was a temporary arrangement.

However, soon after the move, locals in Gilgit-Baltistan region who didn't want British presence in the Kingdom, rebelled against Maharaja Hari Singh. Taking advantage of the situation, Major Brown and the British imprisoned Brigadier Ghansara Singh, a key official in the Maharaja's army.

After Independence, Maharaja Hari Singh, the ruler of Jammu and Kashmir (including Gilgit-Baltistan) decided to join the Union of India. But on November 2, 1947, Major Brown, who was still stationed in the area but had no decision-making authority, in a sly and deceitful manner, allowed the Pakistani army and tribals to illegally occupy the region.

After illegally occupying Gilgit-Baltistan, Pakistan used it as a base to carry out multiple and repeated attacks in nearby areas of the state.

"Gilgit-Baltistan was taken over without any resistance in an illegal manner," Ram Madhav said. He also highlighted that legally, the British had returned the area where their military was present to the Maharaja two days after partition.

Hitting out at Pakistan, Mr Madhav pointed out how the Pakistani Army has been resorting to genocides, massacres, and gross human rights violations in Gilgit-Baltistan region in Pakistan-occupied Kashmir.

Mr Madhav, who was a key negotiator when the BJP and PDP decided to form a coalition government in the state, said one of the clauses in the Common Minimum Programme was to open a trade route from Kargil to Skardu, a town in Gilgit-Baltistan region.

"We attach great significance to Gilgit-Baltistan," he said.