"As per my information Srinagar is getting a new mayor who is a foreign-educated young person and if this leader emerges, both parties are jittery," Governor Satya Pal Malik had told NDTV. 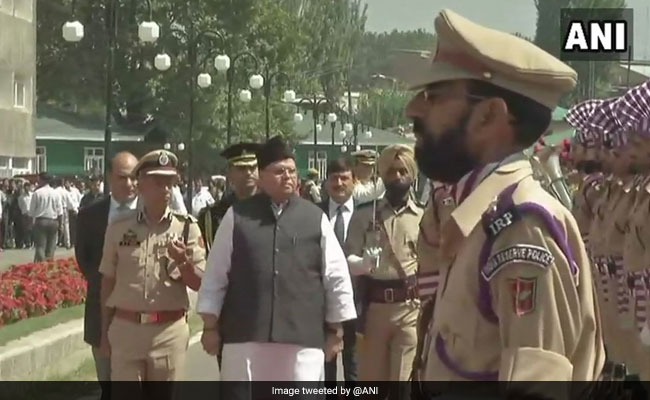 Jammu and Kashmir Governor Satya Pal Malik has come under attack for his comments on NDTV "naming" the next mayor of Srinagar, even before the civic polls are over. The opposition says it exposes the elections as a farce, more of a "selection". Both the National Conference of former chief minister Omar Abdullah and the Congress have strongly reacted to the governor's comments.

Speaking to NDTV earlier this week, the governor had, responding to allegations of unfair polls, said: "Both parties (the National Conference and Mehbooba Mufti's People's Democratic Party) are regretting they did not participate. As per my information Srinagar is getting a new mayor who is a foreign-educated young person and if this leader emerges, both parties are jittery."

He also said: "...the boy's name is Mattoo, he is very well-educated...The day he becomes mayor, he will be better than (National Conference leader) Farooq (Abdullah) saab in that time. He will get more respect."

The comments are proof the elections are "managed", said National Conference spokesperson Aga Rohullah, as voting took place on Wednesday in the second round of staggered four-phase civic polls in Jammu and Kashmir, which will end on October 16.

The Congress also lashed out at the governor.

"He has already announced the result saying a foreign educated candidate will be mayor of Srinagar Municipal Corporation. Now there is will be no election because he has already decided about it. People have not even cast their vote; people don't even who their candidates are which we see on ground. But here they have decided who is mayor, municipal corporation is formed. Governor Sahib has decided everything at his home. We have lost faith in these elections," said GN Monga, a senior leader of the state Congress.

The civic polls are being held in the state after 13 years. The two main regional parties, the National Conference and PDP boycotted the elections citing uncertainty over the centre's stand on Article 35A of the Constitution on land ownership rights.

In many seats, candidates of the BJP are set to be elected unopposed because there are no other candidates. In many municipal wards in Kashmir, voters don't even know who the candidates are; the Election Commission has not revealed the names citing security.