"The home minister made it clear that there was no question on the issue of any demographic change," Altaf Bukhari said. 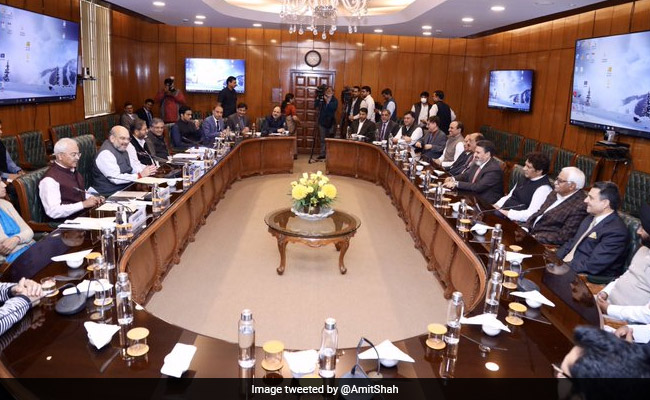 Chief of newly-formed ''JK Apni Party'' Altaf Bukhari met Union Home Minister Amit Shah on Sunday during which the minister allayed fears of demographic changes in Jammu and Kashmir and also assured for an early return of statehood.

Emerging after a nearly two-hour-long meeting with the home minister, Mr Bukhari, a businessman-turned-politician who led a delegation of the party, said various issues, including apprehension of people of a possible demographic change, early restoration of statehood and release of political prisoners were discussed.

"The home minister made it clear that there was no question on the issue of any demographic change," Mr Bukhari said.

He said the home minister also reiterated that the government was committed for early restoration of statehood to Jammu and Kashmir and also said that the process of delimitation would be completed in the most scientific manner at the earliest.

The meeting came a day after the delegation had called on Prime Minister Narendra Modi.

We held discussions at great length on series of topics and issues related to the peace and development of J&K region. PM @NarendraModi ji's govt will leave no stone unturned to take J&K forward. pic.twitter.com/ndSGjJU2Lp

Union Home Secretary Ajay Bhalla and other senior officers were present at the meeting.

During the meeting, the home minister also assured the delegation that the domicile rights of people would be protected, Mr Bukhari said.

The JK Apni Party chief also raised various other issues, including autonomy of Jammu and Kashmir Bank, age relaxation of youths from union territory appearing in the Union Public Service Commission (UPSC) exams, relief in horticulture and agriculture, besides the tourism sector.