Police said that 52 kilogram of heroin worth Rs 100 crore from a Punjab-bound truck. 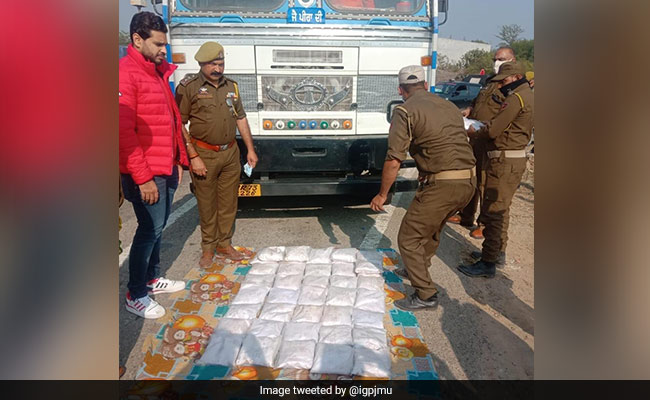 The packets were seized from a Punjab bound truck, police said.

Police on Thursday seized 52 kilogram of heroin worth Rs 100 crore from a Punjab-bound truck and arrested one person, a senior police official said.

Initial investigation suggests that the narcotics was smuggled into Jammu and Kashmir from Pakistan to fund terrorism in the Valley, police said.

"On a specific information, station house officer (SHO) of Jhajjar Kotli Devender Singh set up checkpoints for the search of vehicles on a highway," senior police official Mukesh Singh told reporters at a press conference.

Mukesh Singh said a truck on its way to Punjab from Srinagar jumped a checkpoint and tried to sped away but was intercepted.

During the search of the truck, police seized 52 kilogram of heroin worth Rs 100 crore in the international market, he said.

However, the driver of the truck managed to escape, the police official said.

But co-driver, identified as Bharat Kumar of Haryana, was arrested, he added.

During initial investigation, it came to the fore that the consignment of heroin was being smuggled to Punjab from Srinagar in Kashmir, the official said.

Pockets containing heroin have 1999 markings, which points towards its smuggling into J-K from Pakistan to fund terrorism, he said. Earlier seizures of heroin had similar markings as well, he added.

Giving further information, Mukesh Singh said police have seized 185 kilogram of heroin worth Rs 360 crore in the past two years in the Jammu region, besides 500 kilogram of cannabis and 2,500 kilograms of poppy.

He said 1,500 persons have been arrested in connection with narcotics smuggling and 1,200 cases have been registered during the period.