Athar Mushtaq, a class 11th student, was killed along with Zubair Ahmd and Ajaz Ahmad at Lawaypora on the outskirts of Srinagar on Wednesday. 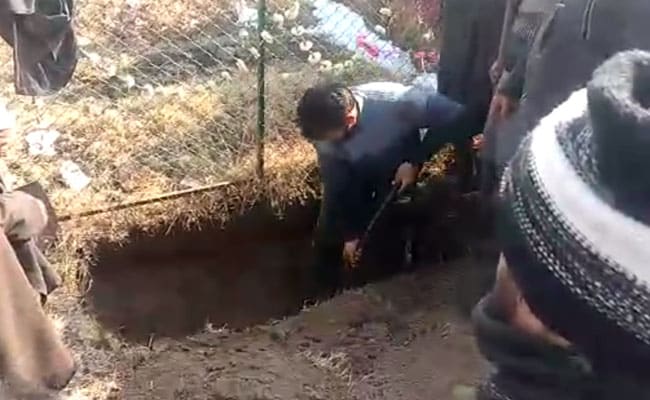 Mushtaq said he wants to bury his son in their ancestral graveyard.

Four days after his son was burried by police at an undisclosed location in Sonmarg area, a man in south Kashmir's Pulwama has dug up a second grave hoping to get back the body of his teenaged son who was killed along with two other youth in a controversial encounter in Srinagar.

The security forces have claimed that Athar Mushtaq and his "associates" were terrorists who were planning a major terror strike on Srinagar-Baramulla Highway. "We were getting regular inputs that terrorists were planning some major strike. Yesterday, when we received information, we cordoned off the building and appealed to them to surrender. One terrorist tried to come out but his associates inside resorted to firing and threw grenades towards security forces," said Major General HS Sahi, General Officer Commanding (GOC) Kilo Force..

But Athar Mushtaq's family claims that he is innocent and the encounter staged. "I will wait for the return of his body so that he is buried here in the ancestral graveyard," said Mushtaq while digging the grave.

Athar Mushtaq, a class 11th student, was killed along with Zubair Ahmd and Ajaz Ahmad at Lawaypora on the outskirts of Srinagar on Wednesday. Army said one AK assault rifle and two pistols were recovered from the site of the encounter.

The army also said that they were given offer to surrender during the anti-terror operaton, but they ignored the offer and resorted to firing and threw grenades on security forces.

The families of the youths, however, allege that it was a staged encounter. Two of the killed youth belonged to police families. 24-year-old Aijaz is son of a police head constable and two brothers of 22-year-old Zubair are also policemen.

Aijaz's family has claimed that he was on complete bed rest for over a month as he was suffering from serious back problem.

The police have not been consistent in their statements on the encounter. In the first statement, police distanced itself from encounter and said they had no record of the three being listed as terrorists. But two days later they claimed that the three youths were indeed "terrorist associates". A spokesman of police added that " police are investigating the case from all angles"

The Srinagar encounter took place days after the police filed a chargesheet against an Army Captain and two others for killing three labourers in Shopian and passed them as Pakistani terrorists, in July. A court of inquiry ordered by the Army has also indicted its soldiers for killing the innocent men.

After encounter locals and family had allege that innocent people were killed but Army and police denied allegations. The three cousins from Rajouri had come to Shopian in July to work as labourers. They were picked up from a rented accommodation and killed in a staged encounter in an an Apple orchard.

After "encounter" a Brigadier of Army had claimed that killed terrorists were planning a major terror strike in Shopian. He also claimed recovery of weapons at the site of encounter. The investigation later found that weapons were planted by the troops on the bodies of three labourers to justify killings and pass them off as terrorists.

After a long and painful wait, the bodies of three men were finally exhumed and handed over to the family in October.