J&K DDC Polls: Of these candidates, 8 are Independents, followed by three from the BJP, 2 each from the National Conference and the Congress and 1 each from the Jammu and Kashmir Apni Party, People Democratic Front (PDF) and the Peoples Conference (PC), as per data of the state election authority. 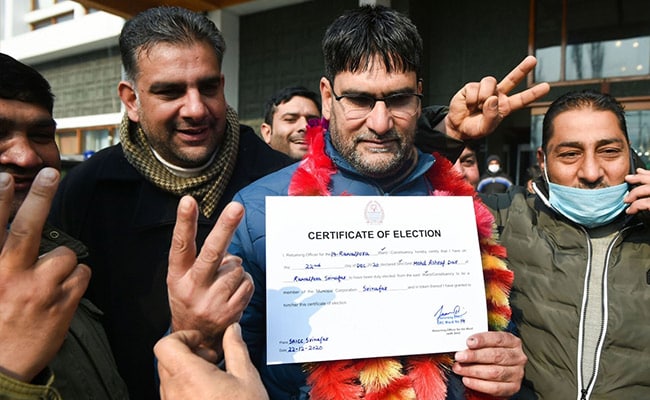 Nineteen candidates saw an extremely close contest in the maiden District Development Council (DDC) polls in Jammu and Kashmir where the margin of victory was less than 100 votes.

Of these candidates, eight are Independents, followed by three from the BJP, two each from the National Conference and the Congress and one each from the Jammu and Kashmir Apni Party (JKAP), People Democratic Front (PDF) and the Peoples Conference (PC), as per data of the state election authority.

Avtar Singh, a Sikh who contested as Independent candidate in the Dadsara constituency of Pulwama district, won the DDC polls by just three votes.

Khalid Bibi won Larnoo segment of Anantnag district on the Peoples Democratic Party (PDP) ticket with a thin margin of seven votes as she polled 4,580 votes against his rival Independent candidate Sajida Begam, who polled 4,573 votes.

As per figures of the state election authority, Sham Lal Choudhary polled 12,958 votes against Independent candidate Taranjit Singh, who polled 12,969 votes and lost by a very thin margin of 11 votes in Suchetgarh segment of Jammu district.

Mr Choudhary was a cabinet minister in the BJP-PDP coalition government in the erstwhile state of Jammu and Kashmir.

Ashu Sharma of the BJP defeated Panthers party candidate Rishma Sambyal in the Tikri seat of Udhampur district by 14 votes.

The PAGD (Gupkar Alliance) swept the maiden district polls by winning 110 seats, while the BJP emerged as the single largest party by getting 74 seats after securing the largest vote share in Jammu and Kashmir, officials said on Wednesday.

The results of four constituencies - one each in Bandipora and Kupwara districts of north Kashmir and Poonch and Rajouri districts in Jammu region - were awaited.