Both Ivanka Trump, 38 and Jared Kushner, 39, are senior advisors to US President Donald Trump. 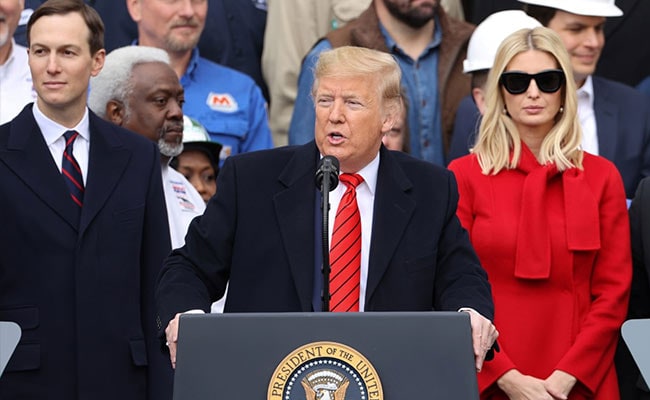 Donald Trump and Melania Trump will be accompanied by Ivanka Trump and Jared Kushner.

Donald Trump's daughter Ivanka and son-in-law Jared Kushner will be part of a high-powered delegation that accompanies the US President to India next week. US National Security Advisor Robert O' Brien, Secretary of the Treasury Steve Mnuchin, Commerce Secretary Wilbur Ross and Secretary of Energy Dan Brouillette too are expected to be part of the delegation.

US trade representative, Robert Lighthizer, will not be coming. He has been negotiating with Commerce Minister Piyush Goyal for a trade deal, which both sides have put off, with several differences still remaining.

Both Ivanka Trump, 38 and Mr Kushner, 39, are senior advisors to the US President.

The President and his entourage will arrive in Ahmedabad on Monday, February 24, and after a roadshow, Mr Trump and Prime Minister Narendra Modi will address crowds at the the newly-built Sardar Vallabhbhai Patel cricket stadium, an event the government says has been organised by the "Donald Trump Nagrik Abhinandan Samiti". It is not clear what this "samiti" or committee is and who is paying for the event at the stadium, the world's largest cricket stadium.

Later that day, the American President and his family will travel to Agra and then fly into Delhi in the evening for formal talks the next day.

Even though a trade deal is not happening, a $2.6 billion helicopter deal for the Navy is on the cards. Twenty four naval helicopters -- MH-60R - are likely to replace the obsolete British-made Sea King choppers, which first joined the Indian military fleet 49 years ago. The MH-60R will be deployed on warships to fight submarines and ships.

Other pacts on Homeland security, nuclear power plants are also on the cards during Mr Trump's first state visit to India.

PM Modi and Mr Trump have had eight meetings so far since the US president assumed office in January 2017. Five of these have happened over the past eight months.

All Coronavirus Deaths To Be Certified, Or Action Likely: Centre In Court