'It's Scary To Step Back Into Society, Face People', Say Talwars After Four Years In Jail

The dentist couple said they are slowly learning to get used to facing the world. 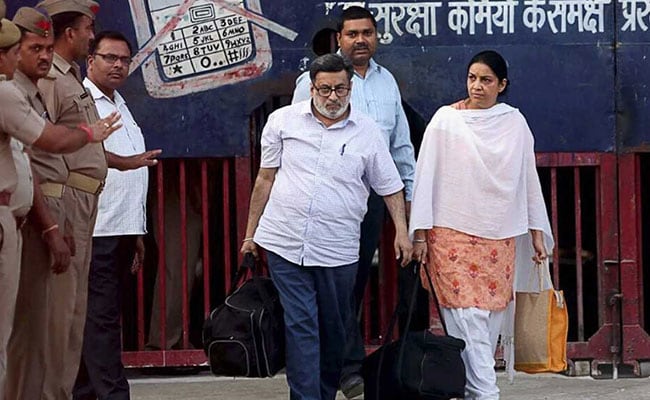 Nupur and Rajesh Talwar were acquitted by the Allahabad High Court on October 12. (File photo)

Mumbai: Dentist couple Rajesh and Nupur Talwar, who walked out of Dasna jail in Ghaziabad after four years of imprisonment in connection with the murder of their daughter Aarushi Talwar and domestic help Hemraj in 2009 said on Saturday that it is a "little scary" to step back into society after a long confinement.

The couple was acquitted by the Allahabad High Court on October 12. They walked free from Dasna prison on October 16. They were in jail for the last four years after a CBI Special Court held them guilty of murdering their daughter Aarushi and destroying the evidence.

The couple have broken their silence since their release in a special 19 minutes long interview for an online streaming app Hotstar "Unsolved Aarushi Murder: The Talwars Break Their Silence", a statement said.

"After being confined for so long, you suddenly come into freedom or you suddenly step out. We could see a lot of people outside, we could see that this had attracted a lot of attention. It is a little scary to face people, face the world, go back into the world, into society, it's difficult, it's something you have to slowly learn," Rajesh Talwar said.

"I am helpful to a friend of mine who helped both of us to face world in better way and gave us the confidence to step out.

"A big load had been lifted from our back and it was a big sense of relief and I was very grateful to god that our stand had been vindicated by the High Court," he added.

Promoted
Listen to the latest songs, only on JioSaavn.com
The Talwars always maintained that they had nothing to do with the horrific killing of their daughter or domestic help Hemraj.

Last week, the family of Hemraj had said they may approach the Supreme Court to appeal against the High Court verdict.