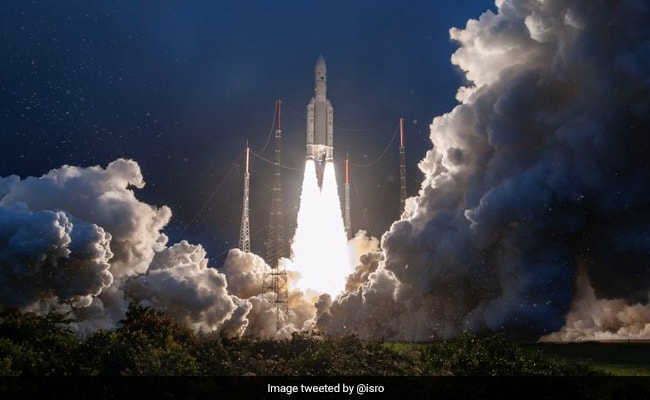 It was launched from Ariane Launch Complex in Kourou, a French territory in South America.

Blasting off from the Ariane Launch Complex in Kourou, a French territory located in northeastern coast of South America at 2:35 am, European space consortium Arianespace's Ariane 5 vehicle injected GSAT-30 into the orbit in a flawless flight lasting about 38 minutes.

Congratulations to our @isro team for the first satellite launch of 2020. GSAT-30, with its unique configuration will provide DTH Television services, connectivity to ATMs, stock exchanges and e-Governance. Wish many more successful missions to ISRO in the year: PM @narendramodi

Confirming the successful launch, Arianespace CEO Stephane Israel tweeted: "A strong start to 2020 as Ariane 5 successfully deploys its two satellite passengers - EUTELSAT KONNECT and GSAT-30 - into geostationary transfer orbit! I appreciate the trust from the two customers on this mission: @Eutelsat_SA and @ISRO #VA251 #MissiontoSuccess." The tweet mentioned Eutelsat satellite operator and ISRO.

Flight #VA251 marked another #Arianespace success for @ISRO, with a total of 24 spacecraft orbited for #India's space agency. Thanks for your continued confidence on today's #MissiontoSuccess. pic.twitter.com/qQuUmaOLdN

ISRO's UR Rao Satellite Centre Director P Kunhikrishnan, who was present in Kourou, congratulated the ISRO community and Arianespace team on the successful launch.

Calling it an "excellent start" to 2020 for ISRO with the launch, he said, "The mission team at the master control facility have already acquired the satellite and they will immediately complete the post launch operations...."

The 3,357-kg satellite, which was deployed from the lower passenger position of Ariane-5 launch vehicle (VA 251) into to geostationary transfer orbit (GTO), is configured on ISRO's enhanced I-3K Bus structure to provide communication services from Geostationary orbit in C and Ku bands.

#GSAT30 successfully separated from the upper stage of #Ariane5#VA251pic.twitter.com/XraPhj37Xl

The satellite derives its heritage from ISRO's earlier INSAT/GSAT satellite series, and is equipped with 12 C and 12 Ku band transponders.

GSAT-30 is to serve as replacement to the "aging" INSAT-4A spacecraft services with enhanced coverage, ISRO has said, adding the satellite provides Indian mainland and islands coverage in Ku-band and extended coverage in C-band covering Gulf countries, a large number of Asian countries and Australia.

With a mission life of 15 years, GSAT-30 is an operational communication satellite for DTH, television uplink and VSAT services.

The Bengaluru-headquartered ISRO has said the communication payload of GSAT-30 is specifically designed and optimised to maximise the number of transponders on the spacecraft bus.

One Ku-band beacon downlink signal is transmitted for ground-tracking purpose, it added.

For its initial flight of 2020, Arianespace on its website said, it would orbit EUTELSAT KONNECT, a telecommunication satellite for the operator Eutelsat, along with GSAT-30, using an Ariane 5 launch vehicle from the Guiana Space Centre.

EUTELSAT KONNECT - which was produced by Thales Alenia Space for Eutelsat - was riding in the upper position of Ariane 5's payload arrangement, and was released first in the flight sequence at 27 minutes following liftoff.

Since the launch of India's APPLE experimental satellite on Ariane Flight L03 in 1981, Arianespace has orbited 24 satellites, including GSAT-30, for the Indian space agency.