BJP, Trinamool In War Of Words A Day Before 12-Hour West Bengal Bandh

The opposition BJP took out rallies in the city and the state on Tuesday in support of the 'Bangla bandh', while the ruling Trinamool Congress (TMC) countered it with processions denouncing it. 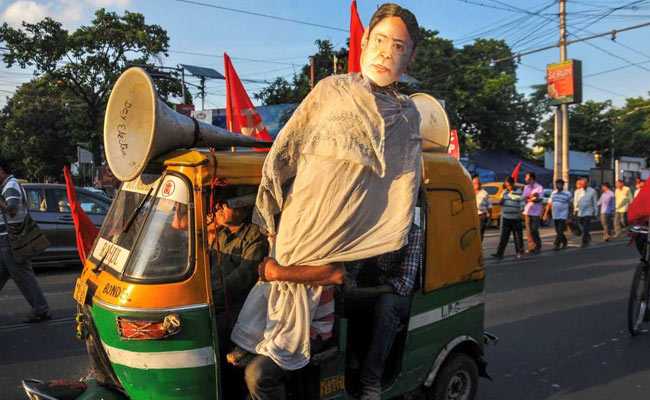 The Trinamool Congress government has vowed to take stern action against those trying to enforce a 12-hour bandh on Wednesday called by the BJP in West Bengal to protest the killing of two students in a clash with police in North Dinajpur district, while a combative BJP warned of "repercussions" if the ruling party attempted to foil the stir.

The opposition BJP took out rallies in the city and the state on Tuesday in support of the 'Bangla bandh', while the ruling Trinamool Congress (TMC) countered it with processions denouncing it.

The BJP claimed that the shutdown would be a complete success as the people of Islampur, where the clash took place on Thursday over appointment of Urdu teacher, and the entire state are fed up with the "misrule of TMC".

TMC secretary general and state education minister Partha Chatterjee charged the BJP with trying to foment trouble in the state and said all steps will be taken to ensure normal life is not affected. "The police will take stern action if anyone tries to enforce the bandh," he said and accused the BJP of trying to instil a sense of fear among the people.

The education minister asked schools and colleges to remain open. Some private schools have declared a holiday tomorrow on account of the bandh. State-run buses will ply as usual, he said and urged commercial establishments, private offices and educational institutions to function normally tomorrow.

But BJP state president Dilip Ghosh said "the people are fed up with this government. They will participate in this strike peacefully. But if the TMC and its goons try to foil the strike, there will be repercussions."

"The state government is trying to hush up the incident in Islampur (in North Dinajpur). But we won't stop until and unless justice is delivered," he said.

The state government has already issued a notification for its employees asking them to attend office on the day of the bandh. There will be no holiday on the day before or after the Bangla Bandh. Even a half holiday will not be sanctioned on the day, it said.

Partha Chatterjee alleged, "The BJP is trying to instill a sense of fear among the masses with their 12-hour strike call. The kind of language they are using is completely unacceptable. They don't have any mass base and are issuing threats."

He said private schools which have declared a holiday tomorrow should have discussed the matter with the state government before taking a call on it.

Dilip Ghosh, however, said the state government goes all out to foil a strike if the opposition parties call a bandh and wondered if Chief Minister Mamata Banerjee has forgotten how many strikes her party had called in West Bengal since 1998, the year the TMC was formed.

He alleged that some IPS officers officer-in-charge were working for the TMC government and warned that they would "not be spared".

"The TMC government will not be there after 2021 but they (officers) have long services. We (BJP) will not spare them... We will remember their names. We have sharp memories," he said at Hemtabad in North Dinajpur district.

Rahul Sinha, BJP national secretary, said the TMC's reaction only showed that the state government is "nervous" and wants to use the police to ensure that the shutdown did not take place. "The TMC government has completely failed to maintain law and order in the state. There is a complete lawless situation in the state," he alleged.

The TMC leaders alleged that the BJP was trying to stop development work in the state. The opposition Congress and CPI(M) have protested against the Islampur incident but did not support the strike call. They accused both the TMC and the BJP of trying to create communal polarisation in the state over the incident.

A senior Kolkata Police official said strict action would be initiated against those found trying to disrupt normal life Wednesday. As per the directive of Mamata Banerjee, who is currently on an official tour to Europe, extra police force would be deployed to foil BJP activists from stalling normal life in the state tomorrow, he said.

"Extra precautionary measures have been taken to counter the bandh. All sanctioned holidays have been cancelled as all senior police officers will be on the city roads tomorrow," he said, adding that anybody trying to stop people or public vehicles from plying normally will be arrested immediately.

"A tight vigil will be initiated from tonight," a senior West Bengal Police officer said. Additional police officers would be deployed in the districts and would be present on the national and state highways, he added.

The ABVP, the student wing of RSS, organised a protest march in central Kolkata and burnt effigies of Mamata Banerjee. They also demanded the immediate resignation of Partha Chatterjee over the Islampur incident.

The two students were killed when protesters clashed with the police on Thursday over recruitment of a Urdu teacher at Daribhita High School in North Dinajpur district, police had said. The protesting students had said they did not require a Urdu teacher and demanded that teachers be recruited for science and other subjects.