Not Heard From Muslim Board On Reviewing Ayodhya Verdict: Iqbal Ansari

Iqbal Ansari said the five acres of land to be allocated for building a mosque as per verdict in the Ram Janmabhoomi-Babri Masjid dispute should be within 67 acres of land acquired by the government in Ayodhya. 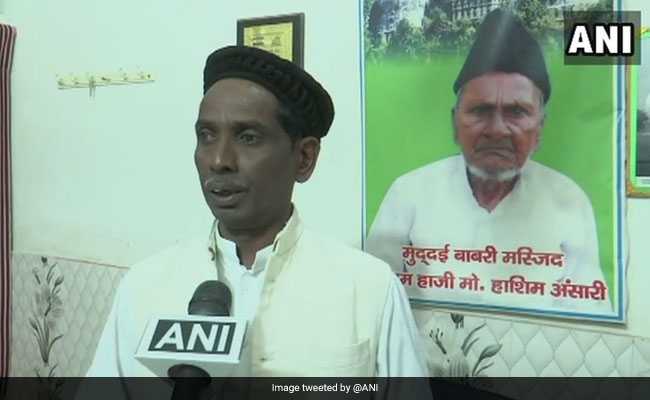 Ahead of a meeting of the All India Muslim Personal Law Board to decide whether to seek a review of the Supreme Court verdict in the Ayodhya case, Iqbal Ansari, the main litigant, said on Wednesday he has "not received any communication" from the AIMPLB in this connection.

Mr Ansari, 53, along with several other local Muslim leaders had recently said the five acres of land to be allocated for building a mosque as per the landmark verdict in the Ram Janmabhoomi-Babri Masjid dispute should be within the 67 acres of land acquired by the government in Ayodhya.

"I know the Muslim Board (AIMPLB) is holding a meeting on Sunday to take a decision on seeking a review of the Supreme Court judgement. I have not received any communication in this connection," he said, when asked if he has been asked by the Board to be part of this process.

"The Board can do whatever it wants now. I do not wish to be any party to that. I feel the judgement has settled a protracted dispute and the society should acknowledge that," he said.

During the meeting, the officials told Mr Ansari to be "cautious in making statements" given the sensitivity of the issue, sources said.

The city of Ayodhya on Wednesday virtually remained fortified with a posse of security forces patrolling and keeping strict vigil while most of the inner roads were still barricaded to restrict movement of vehicles of large crowds.

Mr Ansari became the main litigant after his father Hashmi Ansari died in 2016, in his late 90s, having fought the case since 1949.

Hashmi Ansari was given police security which has now been given to his son too.

Settling a fractious issue that goes back more than a century, the Supreme Court in a historic verdict on Saturday cleared the way for the construction of a Ram temple by a government trust at the disputed site in Ayodhya, and ruled that an alternative five-acre plot must be found for a mosque in the Hindu holy town at a "prominent" location.

Soon after the verdict, the AIMPLB in a press conference in Delhi had said that it would soon hold a meeting of its working committee to decide whether to seek a review of the judgement.

While Mr Ansari sought to steer clear of his earlier remarks, proposing the mosque be built within the 67 acres of the acquired land surrounding the Ramjanmabhomi site, he reiterated that he personally was "not in favour of a review".

Jilani had said the Board will carefully study the 1,045-page judgement and may seek a review.

"Even the inner courtyard has been given to the other party. It is not just," he argued, adding the working committee of the board will soon sit and discuss. "Whatever legal recourse is possible we will take," he told reporters hours after the verdict.

The dispute over the site of Babri Masjid, a three-domed mosque built by or at the behest of Moghul emperor Babur, dates back centuries with Hindus contending that the invading Muslim armies had razed an existing Ram temple to erect the mosque.

However, it turned into a legal dispute in 1885 when a mahant went to court seeking permission to build a canopy outside the mosque. The plea was dismissed.

In December 1949, unidentified men spirited an idol of Lord Ram into the mosque. The structure was demolished by a large mob of kar sevaks on December 6, 1992.