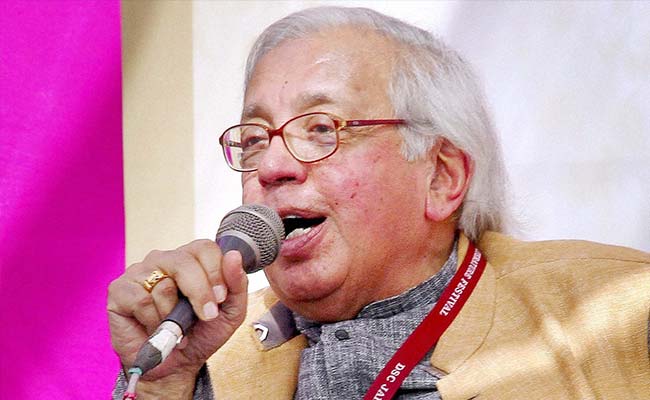 Ashok Vajpeyi said although Prime Minister Narendra Modi had voiced his grief at Rohith Vemula's suicide, he had underplayed the Dalit issue.

Jaipur: Noted writer and poet Ashok Vajpeyi today refused to take back the Sahitya Akademi award that he had returned stating that "intolerance levels remain high" in the country.

"...Intolerance levels remain high and widespread. Look at what happened to a Dalit student driven to suicide. This is also intolerance," Mr Vajpeyi said on the sidelines of the ongoing Jaipur Literature festival.

He had recently returned the degree conferred to him by the Hyderabad Central University in protest against the "anti-dalit" attitude of authorities.

Mr Vajpeyi said although Prime Minister Narendra Modi had voiced his grief at Rohith Vemula's suicide, he had underplayed the Dalit issue.

"The PM emphasised the fact that a mother has lost a son but he underplayed the Dalit part of it. It must be a part of his (main) approach to the problem," Mr Vajpeyi said.

He also slammed the government on its "slow response" to the Hyderabad scholar's suicide.

"I believe that this young Dalit scholar was driven to suicide. Now they are saying that there will be a judicial commission to look into his death, which is good. But all belatedly. Why have you waited six days for this event to simmer?" Mr Vajpeyi asked.

The Hindi poet was among the earliest of about 40 writers who had returned their awards in the past few months to the Sahitya Akademi in protest against the literary body's silence on the killing of writer and rationalist MM Kalburgi.

"The Sahitya Akademi failed to rise up to the occasion. Belatedly, under pressure of so many writers returning their awards the Akademi saw wisdom and took the courage to state that it is an autonomous body and condemned all forms of violence particularly against authors," he said.

"The Sahitya Akademi passed a resolution and wrote a letter to us stating that there was no policy of taking back awards. But in action, it is yet to prove that it is exercising that autonomy," he said.

The writer said he is disappointed that some writers have relented and agreed to take back the awards they had returned.

"It saddens me that authors are taking back awards. I feel sad. But it is their choice, I didn't ask them to give it up and I can't ask them not to take it back," he said.

Terming it as an "intolerance of excellence," Mr Vajpeyi said that individuals are being termed anti-national for not being in agreement with the government.

"There is an intolerance of excellence. You have all kinds of people who enjoy no respect among their peers heading national institutions. That has not disappeared. "There is intolerance of minorities not merely of religion or faith but also of ideas and belief. If you say that you don't agree with the government then you're termed anti-national. All these levels of intolerance remain," he said.