International Yoga Day: Soha Ali Khan Posed (For Herself) With Baby Bump And A Dog

Soha Ali Khan said: "This International Yoga Day don't pose for the photographers, pose for yourself" 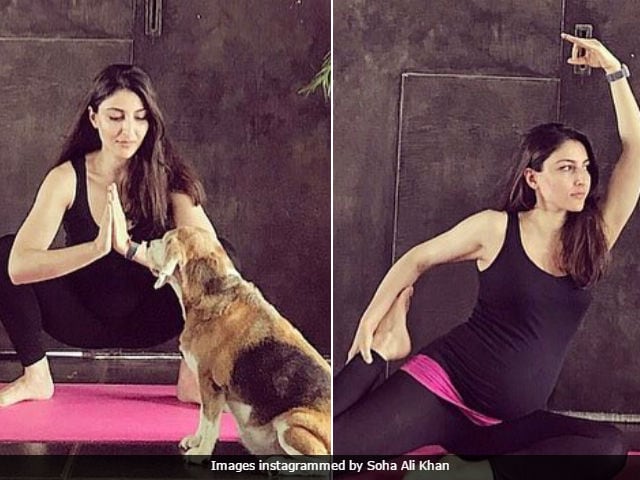 New Delhi: Actress Soha Ali Khan, who is expecting her first child, had a question for her Instagram followers - "Who says you can't stay fit when pregnant?" The answer was Soha's post, which was a collage of images showing her performing various yoga poses with her baby bump (and in one pic, with her dog). Soha, who is married to actor Kunal Khemu, was dressed in black and performed yoga with ease on International Yoga Day. Soha also had an astute message for those who 'pose for the cameras' - "This #internationalyogaday 2017 don't pose for the photographers, pose for yourself (sic)," she said in caption.

This #internationalyogaday 2017 don't pose for the photographers, pose for yourself #yogaforlife

Who says you can't stay fit when pregnant ?! with @rupal_sidh #applewatch and #Masti #doga #yogaforlife #internationalyogaday 2017

Soha and Kunal Khemu were recently on their babymoon in London, where Kunal's parents also joined them. Soha and Kunal shared many, many pictures form their London diaries. Take a look at some of them here:

Soha's sister-in-law, actress Kareena Kapoor Khan (married to actor Saif Ali Khan), recently welcomed her first baby, a son, whom they've name Taimur. Soha told news agency IANS that Kareena has been very during her pregnancy. "She recently went through this. So, I keep asking her a lot of questions on a daily basis. What should I eat, what is allowed, what isn't," said Soha.

Promoted
Listen to the latest songs, only on JioSaavn.com
Soha Ali Khan, 38 and Kunal Khemmu, 34, met on the sets of 2009 film Dhoondte Reh Jaaoge and had a close-knit wedding in 2015. Last year, Soha Ali Khan appeared in two films - Ghayal Once Again and 31st October. She hasn't announced her next project yet.