On Tuesday, Ramdev had said, "Anyone who performs yoga regularly is directly blessed by god."

The main Yoga Day event was held today morning in Ranchi, where Prime Minister Narendra Modi performed yoga along with the other participants.

PM Modi, addressing a crowd of more than 30,000 before starting the event, said, "I want to make yoga an integral part of the lives of the poor and tribals. Because it is the poor who suffer the most due to illness."

"I urge you all to embrace Yoga and make it an integral part of your daily routine. Yoga is ancient and modern. It is constant and evolving," the Prime Minister added. 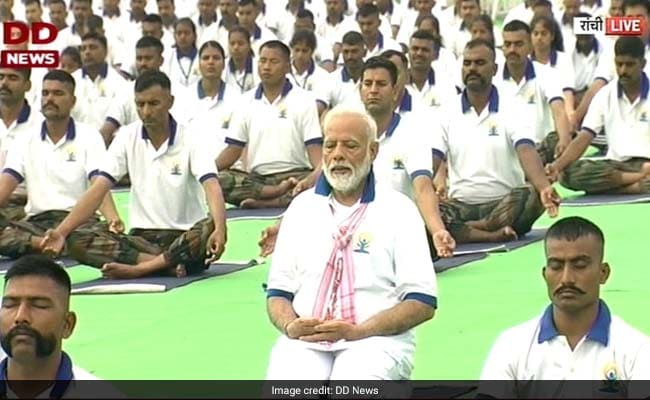 "Only those who practise yoga will enjoy Rajyog (a stint in power)," he said. "Jawaharlal Nehru used to practise yoga and therefore his Rajyog was good and he became prime minister. Indira Gandhi also practised yoga and she also had very good Rajyog," he said.

"Similarly, Modi practised yoga, and the son of a tea-seller became the prime minister. Now Rahul Gandhi is also practising yoga," he said.

The idea of the International Day of Yoga was first proposed by PM Modi during his speech at the United Nations General Assembly (UNGA) on September 27, 2014.