Prime Minister Narendra Modi was for the first time on an official visit to Indonesia - the world's most populous Muslim-majority nation - last month. 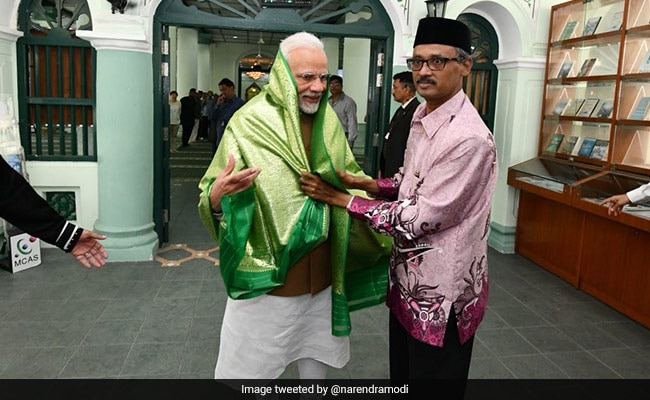 PM Narendra Modi at the Chulia mosque in Singapore.

Lucknow: Samajwadi Party chief Akhilesh Yadav today asked if Prime Minister Narendra Modi's recent visit to Indonesia and Malaysia during the month of Ramzan was an attempt towards "international appeasement" of the minority community.

The former Uttar Pradesh chief minister claimed that the people of not only Uttar Pradesh, but of the entire country was upset with the BJP as other than making promises it "did nothing else".

Citing a proverb, Mr Yadav said, "With empty stomach, people have now understood that the BJP does not mean business."

Asking the BJP to restrain its leaders from making "absurd" comments, he said, "The BJP should learn to face defeats or else they will be not be able to digest the outcome of the 2019 Lok Sabha elections in which the opposition will stage a comeback."

He also slammed the BJP for accusing his party of practising minority appeasement. "Chief Minister Yogi Adityanath says he does not celebrate Eid as he is a Hindu. The BJP charges us with practising Muslim appeasement. (PM) Modi has just visited Indonesia and Malaysia during the month of Ramzan. Is it an attempt towards 'international appeasement' of the Muslims?"

Glad to have visited the Istiqlal Mosque, one of the largest mosques in the world. pic.twitter.com/3iCdBZaIsj

Mr Adityanath had reportedly said that he is a Hindu and does not celebrate Eid, drawing sharp criticisim from opposition.

Prime Minister Narendra Modi was for the first time on an official visit to Indonesia - the world's most populous Muslim-majority nation - last month. He has visited Singapore twice and Malaysia once in 2015.

Indonesia is not only the world's most populous Muslim country, followed by India, but the third largest democracy. Hindus comprise two per cent of Indonesia's population and form close to a 90 per cent majority on the island of Bali.