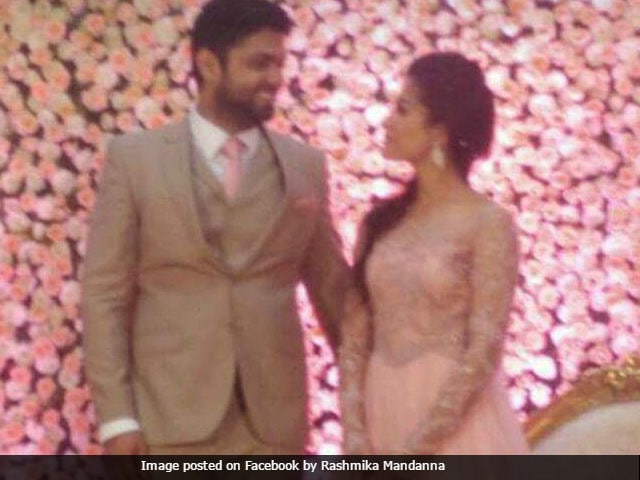 New Delhi: Kannada actress Rashmika Mandanna, star of 2016's Kirik Party, got engaged to her co-star Rakshit Shetty in a lavish ceremony in Rashmika's hometown Virajpet, Karnataka on Monday. Pictures from their engagement ceremony are being shared by fan clubs and are now viral. Rashmika Mandanna wore a pale pink gown with embellished bodice designed by Shraddha Ponnappa while Rakshit wore a beige three piece suit with a complementary tie. Rashmika and Rakshit got engaged at Serenity Marriage Hall, which is owned by Rashmika's father M Madan Mandanna, reports Deccan Chronicle. Kirik Party director Rishab Shetty (who was also invited to the engagement) led the congratulatory messages on Twitter.

Congratulations on ur enagagement. Wishing the cutest couple, a lifetime of love and happiness @rakshitshetty@iamRashmikapic.twitter.com/Mn9aCSu6Oz

Here are some pics from Rashmika Mandanna and Rakshit Shetty's engagement:

Rashmika Mandanna started her career as a model for a Clean &Clear, from where the makers of Kirik Party selected her for the lead role opposite Rakshit Shetty. After the success of her debut film, Rashmika signed Harsha's Anjani Putra opposite Puneeth Rajkumar and Chamak opposite Ganesh. She has also reportedly signed a Telugu film opposite Naga Shourya.