INS Vikrant Live Updates: The 45,000-tonne warship, the largest ever to be built in the country, has been built at cost of Rs 20,000 crore.

INS Vikrant highlights: The warship has completed a year of sea trials.

INS Vikrant, India's first indigenously built aircraft carrier, was commissioned to the Indian Navy today by Prime Minister Narendra Modi at the Cochin Shipyard. The 45,000-tonne warship, the largest ever to be built in the country, has completed a year of sea trials. The cost of building the warship was Rs 20,000 crore. Besides, the Prime Minister also unveiled the new Naval ensign today.

Here are the Highlights on INS Vikrant Commissioning: 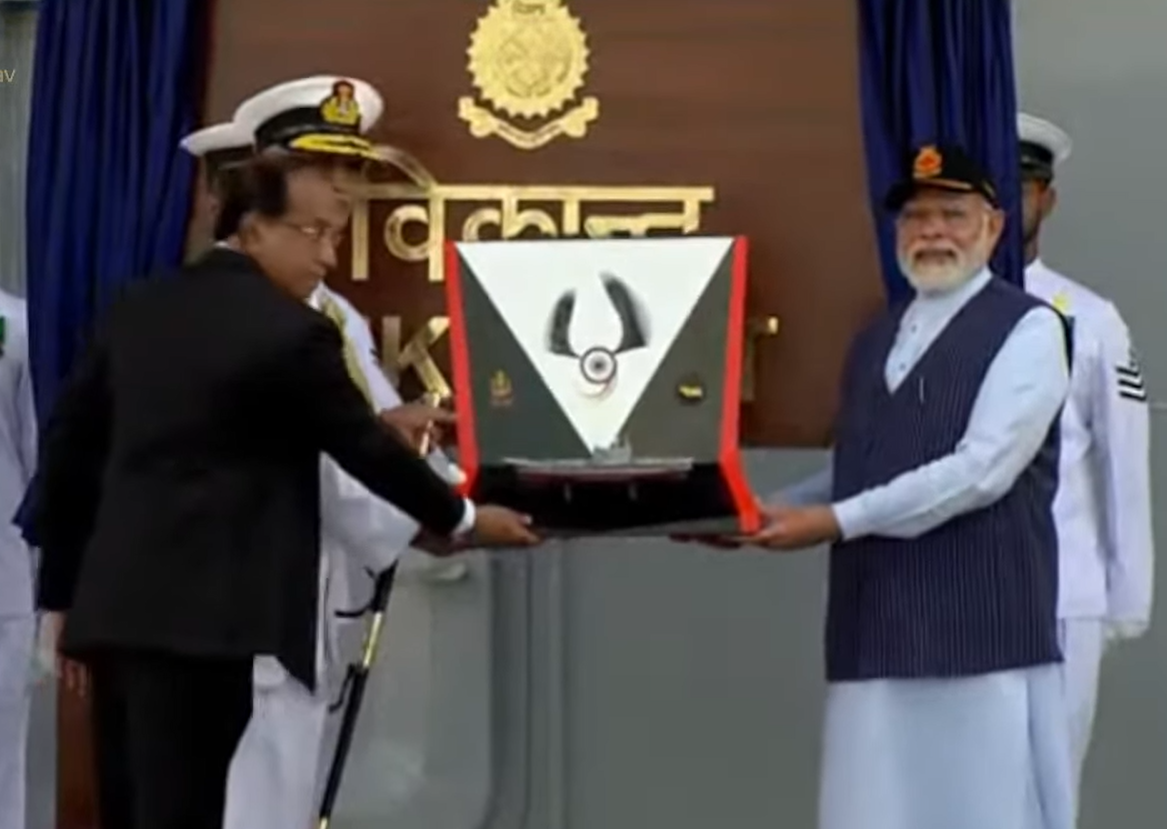 Sep 02, 2022 10:43 (IST)
PM Modi Unfurls New Navy Flag On Board INS Vikrant Aircraft Carrier
Prime Minister Narendra Modi, with Kerala Chief Minister Pinarayi Vijayan, and other senior officials on board INS Vikrant, raises the new flag of the Indian Navy.
Sep 02, 2022 10:34 (IST)
Today Indo-Pacific Region, Indian Ocean Major Defense Priority, Says PM Modi
"Earlier, security concerns in the Indo-Pacific region and Indian Ocean have long been ignored. But, today this area is a major defense priority of the country. That's why we are working in every direction, from increasing the budget for the Navy to increasing its capability, says PM Modi.
Sep 02, 2022 10:31 (IST)
PM Bats For 'Vocal For Local' To Make India Self-Reliant
"Drop by drop of water becomes a vast ocean. Similarly, if every citizen of India starts living the mantra of 'Vocal for Local', then it will not take long for the country to become self-reliant," says PM Modi.
Sep 02, 2022 10:27 (IST)
Indian Navy Has Decided To Open All Its Branches For Women, Says PM Modi
"When Vikrant descends to protect our maritime zone, many women soldiers of the Navy will also be stationed there. With the immense power of the ocean, boundless women power, it is becoming the lofty identity of New India. Now, the Indian Navy has decided to open all its branches for women. The restrictions that were there are now being removed. Just like there are no boundaries for strong waves, there will be no boundaries or restrictions for the daughters of India," says PM Modi.
Sep 02, 2022 10:25 (IST)
Today, India Takes Off A Trace Of Slavery With New Navy Flag: PM Modi
"Today, on the historic date of September 2, 2022, another history-changing act has happened. Today, India has taken off a trace of slavery, a burden of slavery. Indian Navy has got a new flag from today. Till now the identity of slavery remained on the flag of Indian Navy. But from today onwards, inspired by Chhatrapati Shivaji, the new Navy flag will fly in the sea and in the sky," says PM Modi.
Sep 02, 2022 10:23 (IST)
British Tried To Break Back Of India's Maritime Power: PM Modi
"Chhatrapati Shivaji Maharaj built such a navy on the strength of this sea power, which kept the enemies sleepy. When the British came to India, they used to be intimidated by the power of Indian ships and trade through them. So they decided to break the back of India's maritime power. History is witness to how strict restrictions were imposed on Indian ships and merchants by enacting a law in the British Parliament at that time," says PM Modi.
Sep 02, 2022 10:18 (IST)
INS Vikrant A Symbol Of Indigenous Potential, Says PM Modi
"Every part of INS Vikrant has its own merits, a strength, its own development journey. It is a symbol of indigenous potential, indigenous resources and indigenous skills. The steel installed in its airbase is also indigenous," says PM Modi. 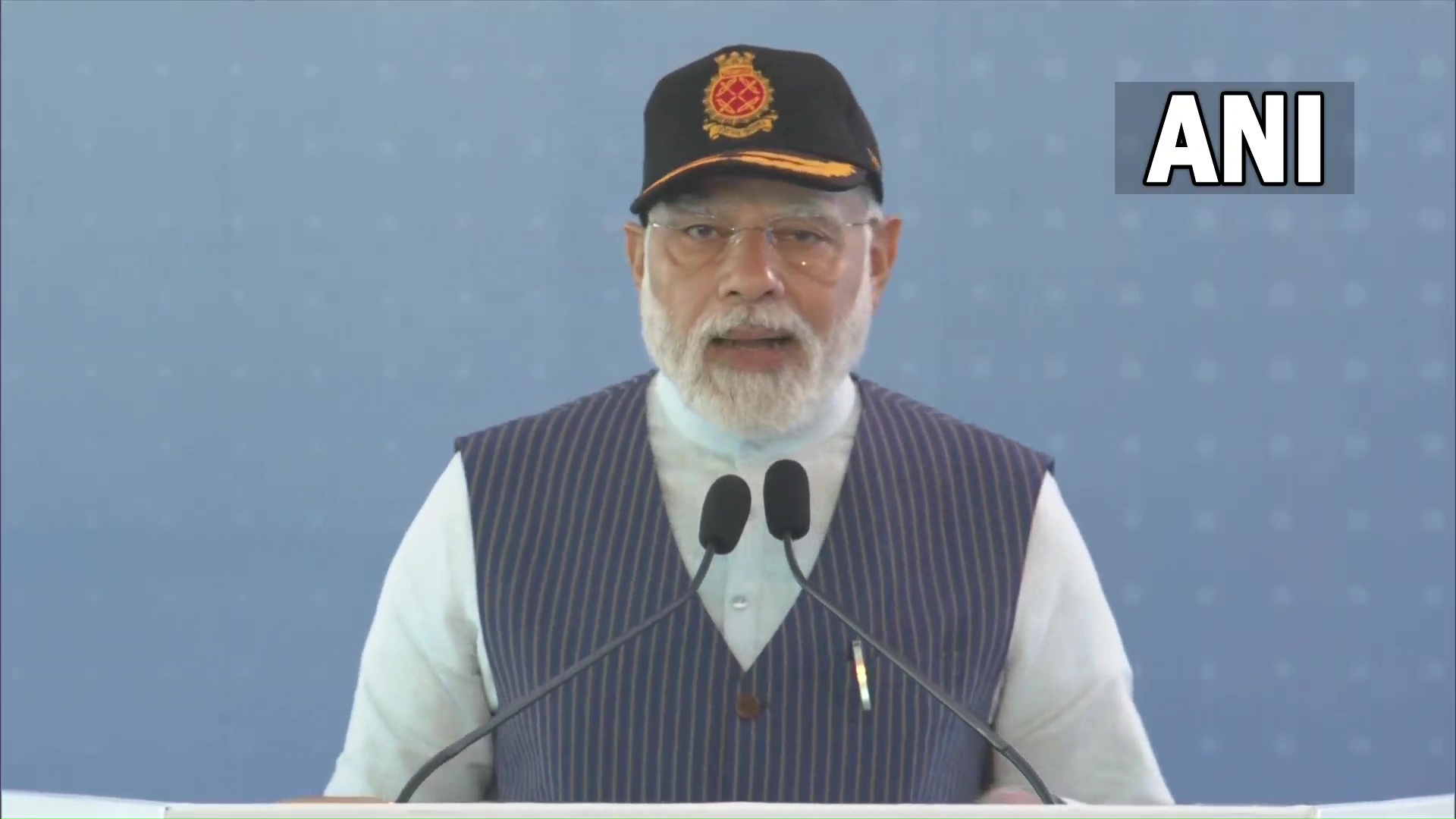 Sep 02, 2022 10:16 (IST)
INS Vikrant Creates A New Confidence In India: PM Modi
"Today India has joined those countries in the world, which manufacture such a huge aircraft carrier with indigenous technology. Today INS Vikrant has filled the country with a new confidence, has created a new confidence in the country," says PM Modi.
Sep 02, 2022 10:14 (IST)
INS Vikrant A Unique Reflection Of India Becoming Self-Reliant: PM Modi
"If the goals are quick, the journeys are long, the ocean and the challenges are endless - then India's answer is Vikrant. The incomparable elixir of the elixir of freedom is Vikrant. Vikrant is a unique reflection of India becoming self-reliant," says PM Modi.
Sep 02, 2022 10:12 (IST)
INS Vikrant A Testament To India's Hard Work, Talent: PM Modi
"Today, here on the coast of Kerala, India, every Indian, is witnessing the sunrise of a new future. This event being held on INS Vikrant is a shout out to India's rising spirits on the world horizon," says PM Modi. "(INS) Vikrant is massive, it's a giant. Vikrant is distinct, Vikrant is special. It is not just a warship but a testament to the hard work, talent, influence and commitment of 21st century India," he adds. 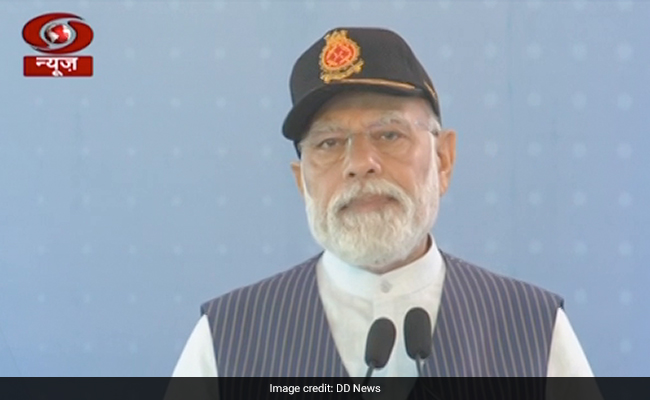 Sep 02, 2022 10:00 (IST)
Our Mission Is 'Make For World', Says Rajnath Singh
"Our mission is not only 'Make in India' but 'Make for the World'. Exports of more than $ 400 billion in the last year are proof of this," says Defense Minister Rajnath Singh.
"As we move rapidly towards a 5-trillion dollar economy, our share in global trade will increase in the times to come. If the share in global trade will increase, then a large part of it will inevitably be through maritime routes," he says.
"We believe in a free, open and inclusive Indo-Pacific. In this regard, our efforts are guided by the vision of the Prime Minister, 'SAGAR' i.e. 'Security And Growth for All in the Region'," the defence minister says.
Sep 02, 2022 09:55 (IST)
INS Vikrant An Exceptional Symbol Of Self-Reliant India: Rajnath Singh
"The commissioning of INS Vikrant at the start of 'Amritkal' reflects our strong resolve to safeguard the nation in the next 25 years. INS Vikrant is an aspirational, and an exceptional symbol of self-reliant India," says Defense Minister Rajnath Singh.

"You all are aware of the Navy's tradition, 'old ships never die'. This new avatar of Vikrant, which played a stellar role in the 1971 war, is a humble tribute to our freedom fighters, brave soldiers along with the achievement of 'Amrit-Kaal'," he adds.
"The commissioning of INS Vikrant is a confirmation that our endeavor for 'Self-reliant India' is not an isolated policy. This is an important part of the huge transformative change taking place in India under the leadership of Hon'ble Prime Minister," the Defence Minister says.
Sep 02, 2022 09:53 (IST)
PM Modi Unveils Indian Navy's New Ensign
Prime Minister Narendra Modi unveils the new ensign of the Indian Navy. 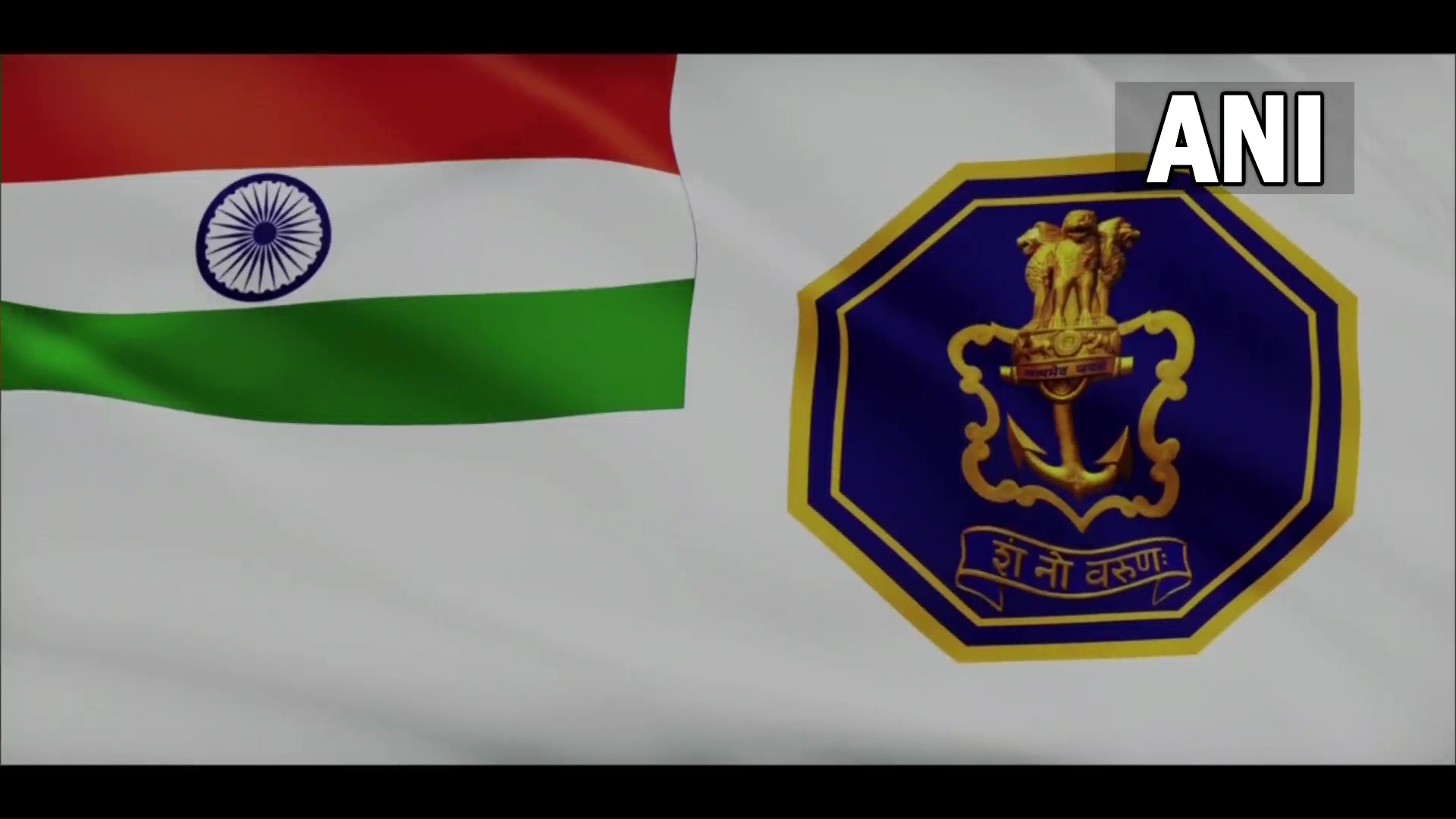 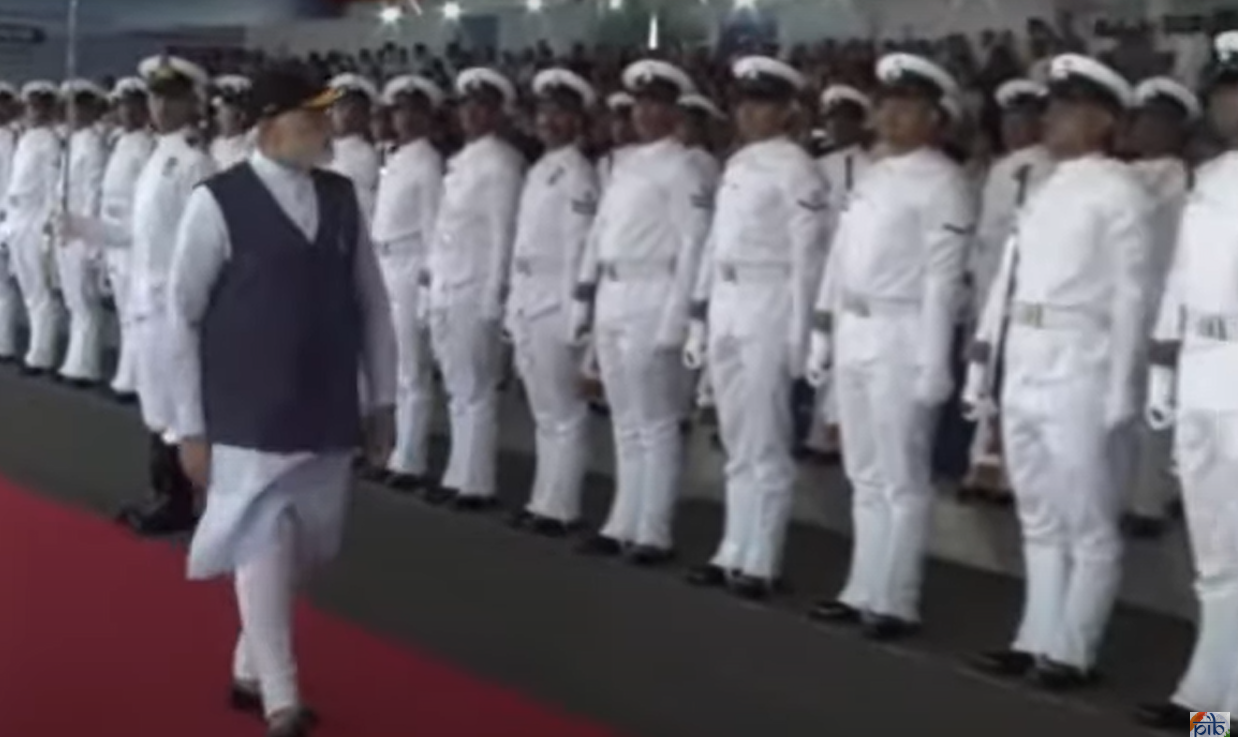 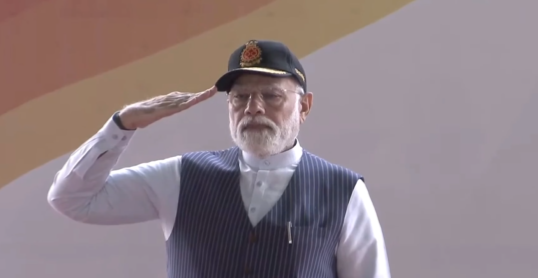 Sep 02, 2022 09:18 (IST)
INS Vikrant, "City On The Move": 18 Floors, 1,600 Crew, 16-Bed Hospital
INS Vikrant, India's first home-built aircraft carrier to be commissioned today, is set to enhance the country's naval strength. Equipped with state-of-the-art facilities, the warship has been tipped as a "city on the move". 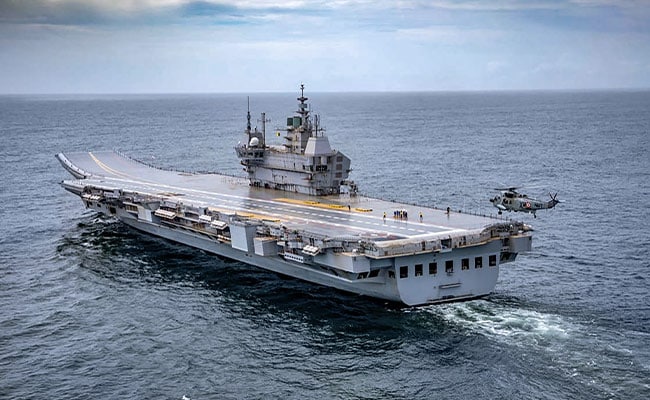 Sep 02, 2022 09:17 (IST)
Exclusive: Vikrant, India's New Flagship, Is A State-Of-The-Art Aircraft Carrier
India's largest indigenous warship, Vikrant will operate 30 fighter jets and helicopters. Constructed at the Cochin shipyard, the aircraft carrier has a crew of over 1,500 and will meet the Indian Navy's need for a third aircraft carrier. 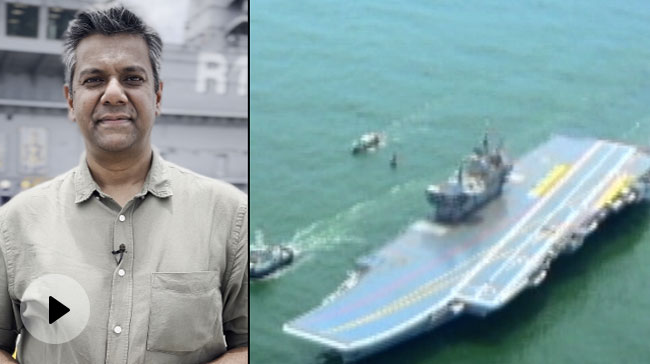 Sep 02, 2022 08:35 (IST)
Here's How Massive INS Vikrant Is - 262 Metres Long, 62 Metres Wide, 18 Floors High
INS Vikrant, the largest warship to be built in India set to be commissioned today, is 262 metres long and 62 metres wide. To put its size in figures easier to understand, the warship is as massive as two football fields end to end and 18 floors high, the Navy said in a video.