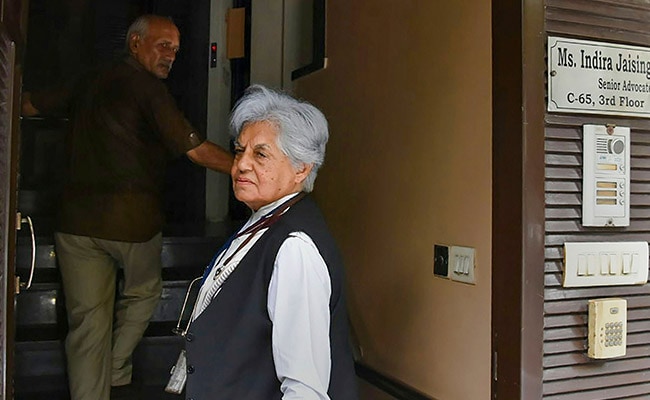 Raids by the Central Bureau of Investigation against senior lawyers Indira Jaising and her husband Anand Grover were "illegal, malicious and a blatant abuse of law", their NGO said on Friday, accusing the BJP-led government at the centre of being rattled by their "fierce independence and advocacy for human rights".

"The FIR (First Information Report) and the raids carried out are nothing but a vicious means to humiliate, intimidate and silence its Trustees, Ms Indira Jaising and Mr Anand Grover, whose fierce independence and advocacy for human rights, perturbs the political establishment of the day," Lawyers Collective said in a statement, a day after the searches.

Raids had started at around 5 am at the home of Ms Jaising in Delhi's Nizamuddin and went past midnight at the offices of Mr Grover's NGO Lawyers Collective in Delhi and Mumbai on Thursday with the CBI accusing them of violating a law on foreign funding.

Indira Jaising and Anand Grover are among the most prominent faces of public interest and civil rights litigation in India and have been involved in path-breaking cases linked to gender justice, gay rights, labour and healthcare.

Lawyers Collective said that the raids were based on the same Foreign Contribution (Regulation) Act or FCRA documents which were investigated by the Home Ministry in 2016. "The FCRA authorities did not think it fit to initiate criminal proceedings at the time of inspection or even later (back then)," it added.

"The CBI could well have summoned the documents but they took the action to raid and humiliate Ms. Indira Jaising and Mr. Anand Grover. The CBI's actions are totally unwarranted, illegal and amount to gross abuse of the process of law," Lawyers Collective said, pointing out that "the CBI issued a press release even as the search was going on".

Vowing to take "appropriate action" as per law against the raids, the NGO said that the "arbitrariness and mala fide intent of the government" was evident that it was the only one of over 18,000 outfits to be criminally prosecuted under FCRA after having their registration cancelled.

Filed in reference to a period when Indira Jaising was Additional Solicitor General between 2009 and 2014, the CBI has alleged that the expenses her foreign trips at the time were from funds of the NGO without Home Ministry approval.

Ms Jaising says there is no conflict of interest; the Additional Solicitor General is a public servant, not a government servant, so is not banned from receiving foreign contributions.