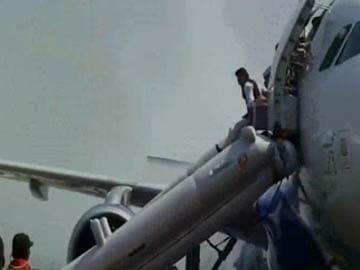 Kathmandu: An Indigo plane from Delhi with 182 people on board today caught fire after it landed at Kathmandu airport but no one was hurt.

All passengers and crew were safely evacuated from emergency doors soon after the ground engineers observed fire from the right brake assembly of the Airbus 320, officials and the airlines said, adding the fire was immediately brought under control.

The no-frills airline said its flight 6E031 with 175 passengers, one infant and six crew members made a normal landing this afternoon at Tribhuwan International airport.

The ground engineer observed smoke and fire from the right brake assembly and advised evacuation of all passengers and crew, it said.

The airline said 171 passengers were evacuated by the flight chutes and remaining passengers and crew left the plane from the forward step ladder during the evacuation process that lasted 81 seconds.

According to a preliminary inquiry, the sparks occurred due to heavy braking during landing, which could have led to a hydraulic leak, The Directorate General of Civil Aviation (DGCA) sources said.

The DGCA will be conducting a full-fledged inquiry into the matter.

Promoted
Listen to the latest songs, only on JioSaavn.com
The airlines is likely to operate a special flight to bring back the passengers who were supposed to come on the same aircraft.

"Safety of all passengers and crew is of utmost importance to Indigo and there is absolutely no compromise on safety," Indigo said.