Priyanka Gandhi Vadra, 47, took up a key position within the Indian National Congress, the party once led by her great-grandfather and currently headed by her elder brother, Rahul Gandhi. 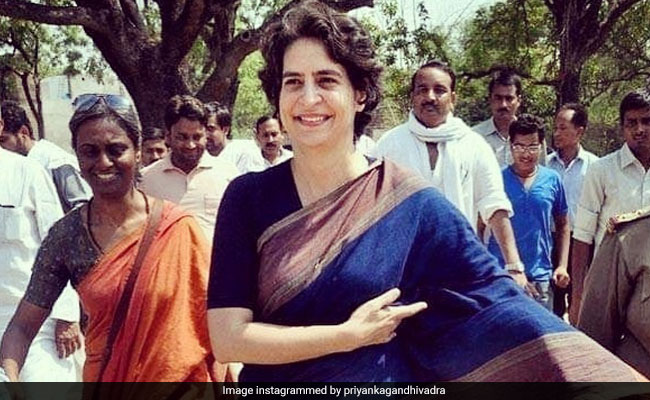 A daughter of India's most famous dynasty jumped into the political arena on Wednesday, shaking up the race to lead the world's largest democracy ahead of elections set for later in the spring.

Priyanka Gandhi Vadra, 47, took up a key position within the Indian National Congress, the party once led by her great-grandfather and currently headed by her elder brother, Rahul Gandhi.

The Congress Party is attempting to deny Prime Minister Narendra Modi a second term, a task which seemed impossible until several months ago. But then it defeated Modi's Bharatiya Janata Party in three state elections in December, suggesting the fight to govern India may be closer than expected.

Priyanka Gandhi's entry into politics has been the subject of fevered speculation for years. Until now, her political forays had been largely limited to appearing at campaign rallies in constituencies held by her family members.

She is a sharp and charismatic orator, bearing a distinct resemblance to her paternal grandmother, Indira Gandhi - India's only female prime minister, who governed the country from 1966 to 1977 and again from 1980 to 1984.

Now Priyanka Gandhi will oversee the Congress Party operations in the eastern part of Uttar Pradesh. Home to more than 200 million people, Uttar Pradesh is the country's most populous state and the place where national elections are won - or lost. In 2014, Modi's BJP executed a near-sweep of the state's 80 seats in parliament.

Priyanka Gandhi's move to join the political fray is a "game-changer," said Rasheed Kidwai, a political commentator and the author of a biography of Sonia Gandhi, Priyanka's Italian-born mother. "The Congress thinks that the upcoming national election is make-or-break. Priyanka is a natural politician and knows what people want."

Sonia Gandhi led the Congress party to two successive victories in 2004 and 2009, but the party posted its worst ever performance in the 2014 elections when Modi swept to power. It also lost a string of successive state elections to the BJP and was reduced to governing three states and a union territory, until its wins late last year.

The ruling BJP immediately criticized the move as the perpetuation of dynastic politics by a party in thrall to a single family. "Rahul Gandhi has failed so he needs Priyanka Gandhi, who is from his own family, as a crutch," Sambit Patra, a BJP spokesperson, told reporters on Wednesday.

India's oldest political party, the Congress traces its roots back to the pre-independence era. Jawaharlal Nehru, India's first prime minister, was a Congress leader. Both his daughter, Indira Gandhi, and his grandson, Rajiv Gandhi, went on to serve as prime minister. (The family is not related to Mahatma Gandhi, the revered leader of India's freedom struggle.)

Rahul Gandhi, Nehru's great-grandson, officially entered politics in 2004. At the time, some openly questioned why his younger sister had not taken up the mantle instead. The general impression is that Priyanka is "more articulate, forceful and more charismatic" than her brother, political scientist Pratap Bhanu Mehta said at the time.

On Wednesday, a visibly excited Rahul Gandhi told reporters that he was looking forward to working with his sister. It is not clear yet whether Priyanka Gandhi will run for a seat in parliament and her brother said that decision remained up to her. Meanwhile, he said, the announcement had sent the BJP into a "panic."

Modi's own constituency falls in the area Priyanka Gandhi will now oversee for her party. In the past, she has not shied away from confronting Modi directly. In 2009, when Modi called the Congress an "old woman," she shot back, asking if she looked old to him.

Gandhi is married to a businessman, Robert Vadra, and has two children. Her husband is currently under investigation for allegedly corrupt land deals. He has dismissed the probe as "politically motivated." On Wednesday, Vadra posted a message on Facebook publicly congratulating his wife on the new role. "Give it your best," he wrote.