The flag was hoisted at the iconic venue by Consul General of India in New York, Randhir Jaiswal, who was the Guest of Honour at the event. 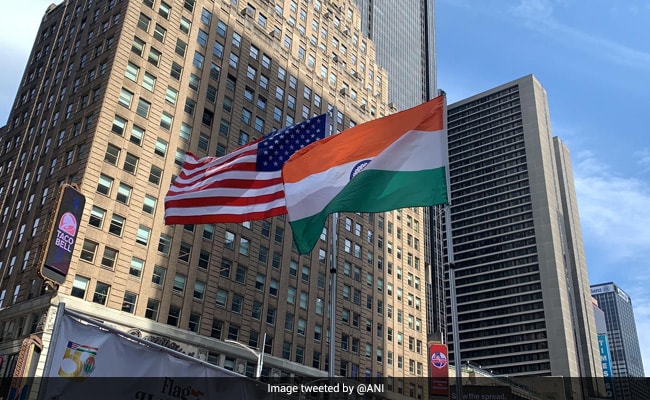 For the first time, the Indian flag was hoisted alongside the US flag at Times Square

The Indian Independence Day celebrations reached its pinnacle on Saturday morning at the iconic Times Square in New York City.

For the first time, the Indian flag was hoisted with pride and patriotism alongside the US flag at Times Square. Over two hundred Indian Americans participated in the event to witness the flag soaring high and wide in the skies of New York. They chanted patriotic slogans and raised Indian flags.

"We have gathered here for our 74th Independence Day. It is an honour and privileged to host it here and make history for our motherland for all the diaspora around the world," said a participant.

The flag was hoisted at the iconic venue by Consul tGeneral of India in New York, Randhir Jaiswal, who was the Guest of Honour at the event.

"Unfurling the Indian tricolour is a matter of great honour anywhere at any time. Today being August 15, and in this times square, the historic place is a matter of even greater pride. I am so honoured so humbled so privileged to be doing so," Mr Jaiswal told ANI.

Alok Kumar, former president of the Federation of Indian Association (FIA), the organisers of the event told ANI that the event was organised keeping in mind coronavirus pandemic and precautions were taking like maintaining social distancing.

"So many people have come to participate even in this testing COVID-19 times. But we are maintaining social distancing," he said

"This is a historic event as the first time in the history we are hosting tricolour here. For Mother India, we are always together," he added.

The Independence Day celebrations mark a new chapter in the Indian-American community history.

Not just the Times Square, the FIA also carried out its annual tradition of illuminating the Empire State Building in to mark India's Independence Day.

The FIA annually organises its flagship event - the India Day Parade to mark India's Independence Day in August. But this year, due to the coronavirus, New York City cancelled all public gatherings which were on a large in scale until September. That's when the idea of celebrating Independence Day at Times Square occurred to the Indian Americans.

Year after year the annual parade sees top US political leaders, lawmakers, as well as prominent members of the Indian-American community and celebrities from India participating, that draws a crowd of thousands in the heart of Manhattan.