The authorisation will be done by the Switzerland-headquartered INSARAG (or the International Search and Rescue Advisory Group) which is a network of more than 90 countries and organisations under the UN umbrella to deal with urban search and rescue related issues. 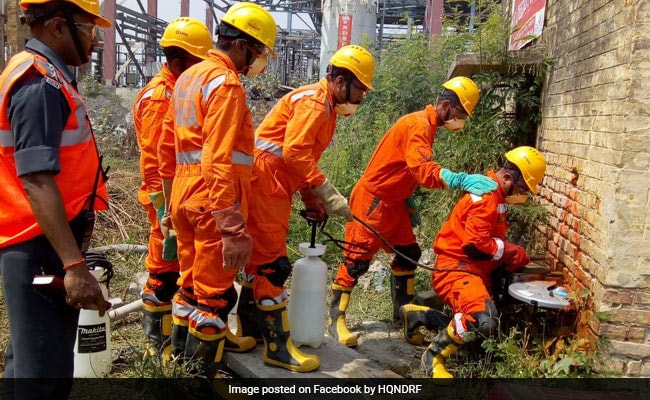 The DG also spoke about reviewing the technology and rescue gadgets used by the force. (Representational)

India could soon be a part of the United Nations (UN) mandated international disaster rescue operations as the country's federal contingency force, NDRF, is expected to obtain a globally recognised standardisation later this year, a top-ranking official has said.

The authorisation will be done by the Switzerland-headquartered INSARAG (or the International Search and Rescue Advisory Group) which is a network of more than 90 countries and organisations under the UN umbrella to deal with urban search and rescue related issues.

"Just like we have the Bureau of Indian Standards in the country, the UN agency INSARAG standardises disaster response teams across the world. It is an international gold standard," NDRF director general S N Pradhan told PTI in an interview.

"We are very much in the thick of it and hopefully we will get the standardisation in 2021."

He further explained the purpose of this categorisation that is possessed by some of India's neighbours like China and Pakistan.

"If there is a call from the UN to respond to some disaster you will be called upon...you will be an international response force," SN Pradhan said.

"It is not that we have not been doing that (going for international rescue operations) but when NDRF went to Japan and Nepal in the past it was a bilateral decision between two countries but with this standardisation it will be a UN-mandated task," he said.

It will be a matter of great prestige for India that its force is known as an international response force, the DG said.

He said an INSARAG committee, comprising Australian and Singaporean experts, has conducted a preliminary review of NDRF teams in September 2019, but the outbreak of the COVID-19 pandemic put the process on a back burner for a while.

"Hopefully, in 2021 you will see at least two heavy teams of the NDRF notified as INSARAG teams," he said.

The National Disaster Response Force was raised in 2006 to undertake specific tasks of relief and rescue during natural and manmade disasters or life-threatening situations. It has 12 operational battalions comprising more than 15,000 personnel based across the country at present while four more battalions are taking shape.

SN Pradhan said this UN standardisation could "trigger a long-term process where more and more of its teams can be certified".

"It (INSARAG standardisation) will be a good thing as NDRF is second to none. This could lead to a cascading effect where NDRF can become a national accreditation agency for state disaster response forces and that also could be UN-supported."

"In Chile and China, the UN has certified their provincial teams so that state teams can also travel across the world for disaster response operations," he said.

These are "very exciting developments" and it can add to the profile of India being a great disaster response-oriented country where the protocols and standard operating procedures are of world standard, he said.

The DG also spoke about reviewing the technology and rescue gadgets used by the force.

"We are reviewing our technology and changing specifications. It is not bad but authorised items in quality and quantity are 10 years old so it calls for a review."

"The review has already been completed and submitted to the government," he said.

SN Pradhan said the force was undertaking "simple but effective" technology changes like using battery-operated saw cutters as compared to those which run on petrol at present.

"We are reviewing the national emergency communication plan. It is going into phase 2 now. We are going to upgrade, have more in quantity and better equipment which is true to form so that we are able to negate any impact of total collapse of communication in a disaster-hit area," he said.

The DG said the force will be upgrading its capacity and equipment in the next two financial years, which will be followed by training.

Training will be made effective in such a way that while NDRF will be the federal force there will be a collaboration with other central paramilitary forces like the CRPF, BSF and ITBP and others so that they have their disaster response units ready to "shore up" NDRF when required, he said.