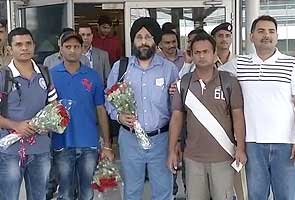 New Delhi: The wait is finally over for the families of Indian sailors rescued from Somali pirates after their vessels were hijacked last year. Most of the 28 seafarers have started arriving in India.

"We are very happy. After 10 months we are here. I would like to thank the media and the government," said a sailor Mukesh who reached Delhi this morning.

"I have forgotten everything, all I remember is that I'm going to meet my family," said another sailor Siddharth.

17 Indian seafarers on board the MT Royal Grace spent more than a year in captivity of pirates since their vessel was hijacked by the Somali pirates in March, 2012; 11 of them were onboard MT Smyrni captured by the pirates in May, 2012.

While most of the seafarers will return to India today, some of those rescued from MT Royal Grace await the arrival of a replacement crew before they can fly back to their families in India, sources said.

They said the MT Royal Grace had reached Salalah port in Muscat on March 13 and MT Smyrni docked there the next day. Both the ships were received by officials of the Indian Embassy in Oman.

The government has been working assiduously to ensure release of Indian nationals in captivity of pirates and had been pursuing the matter at various levels and in different countries, they said.

They, however, did not divulge details of how the government managed to secure their release.

Promoted
Listen to the latest songs, only on JioSaavn.com
The return of these seafarers is a significant milestone in the war against piracy, official sources said, adding the government was committed to secure release of all its nationals including the seven on MT Asphalt Venture and one on MV Al Bedo.