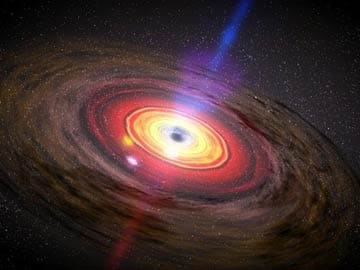 Artist concept of matter swirling around a black hole.

Bangalore: A new paper released late last month in which famed British physicist Stephen Hawking contradicts his own theory and says that Black Holes - in the real sense - do not actually exist has startled the world science community.

But Abhas Mitra, a theoretical physicist at the Bhabha Atomic Research Centre (BARC) in Mumbai, is not at all surprised. "I said more than a decade ago that the Black Hole solutions found in Einstein's General Theory of Relativity actually correspond to zero mass and are never formed. This implies that the so-called Black Holes candidates must be Grey Holes or quasi-Black Holes," Mitra told IANS. "Hawking is saying the same thing now."

Mitra's papers, published in peer reviewed journals since 2000 - that still remain unchallenged - maintain that there can be objects in the universe that are quasi-static or "eternally collapsing" but not exactly Black Holes. "This work was largely ignored by mainstream physicists as well as the media while Hawking's recent two-page online paper saying exactly the same thing has become hot international news," Mitra noted.

He said this happened even though several American astrophysicists verified his prediction that such quasi-Black Holes must have strong magnetic fields unlike the real Black Holes, adding that even Harvard University issued a press release to this effect in 2006.

A Black Hole, according to its proponents, results from gravitational collapse of a massive star after it runs out of fuel for nuclear fusion. A Black Hole is all vacuum except for an infinitely dense central point called "singularity," Mitra said.

As the theory goes, a Black Hole is surrounded by an imaginary boundary called "Event Horizon" that shuts everything within, allowing nothing - not even light - to escape. An object crossing the Event Horizon gets forever trapped and crushed at the singularity, destroying all the information about the object as well. This directly conflicts with the laws of quantum physics that say information can never be completely wiped out. This is the Black Hole "information loss paradox".

The Black Holes also pose a "Firewall Paradox" which arises from the claim that Event Horizon, under the quantum theory, must actually be transformed into a highly energetic region, or firewall, that would burn any approaching object to a crisp. Although the firewall obeyed quantum rules, it flouted Einstein's General Theory of Relativity, Mitra said.

Hawking's latest paper attempts to resolve the Firewall Paradox by proposing that gravitational collapse produces only an Apparent Horizon but not an Event Horizon that is the hallmark of a true Black Hole. He said the absence of Event Horizons means there are no Black Holes in the sense they are usually visualized.

Mitra said he has shown before that there can be no Event Horizon by using the classical theory without invoking uncertain quantum physics as Hawking has done.

In fact, in a series of peer reviewed papers, Mitra has shown that no true Black Holes can ever form. The so-called Black Holes observed by astronomers are actually radiation pressure supported Eternally Collapsing Objects (ECOs). These balls of fire are so hot that even neutrons and protons melt there and whose outward radiation pressure balances the inward pull of gravity to arrest a catastrophic collapse before any Black Hole or 'singularity' would actually form.

"Incidentally, our Sun is also a ball of fire hot enough to melt atoms," Mitra noted.

"Thus, the realization that there can be no true Black Holes and the so-called Black Holes are actually ECOs resolve both the Information and Firewall paradoxes," Mitra said.

"Hawking has now arrived at the same conclusion from tentative arguments while our results are based on exact calculations and were published in a series of peer-reviewed papers over 13 years ago," Mitra added.