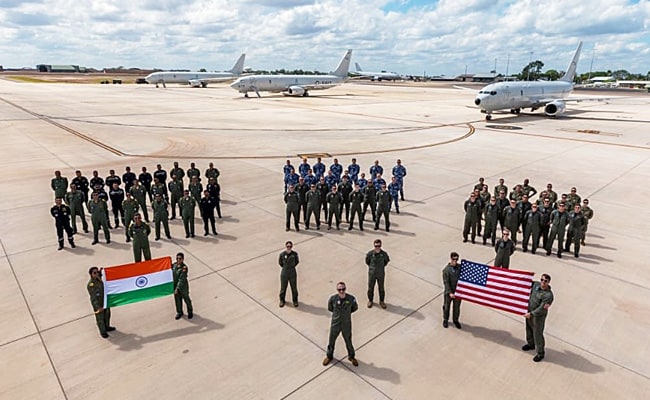 The Indian Navy's Long Range Maritime Reconnaissance Aircraft P8I participated in the Multinational Maritime Exercise Kakadu 2022, which is hosted by Royal Australian Navy in Darwin, where 34 aircraft from over 20 nations were also there.

It is pertinent to mention that the event was held from September 12 to 25, according to the statement released by Defence Ministry.

The maiden participation of the P8I provided an enhanced exposure to the aircrew, augmenting the understanding of the varied nuances of collaborative Anti-Submarine and Anti-Surface Warfare operations in a complex multi-threat scenario.

According to the statement, "The seamless operations conducted by P8I in consonance with the exercise theme 'Partnership, Leadership, Friendship' along with USN and RAAF P8s enabled refining joint SOPs and enhanced interoperability and reaffirm Indian Navy's commitment to the Indo-Pacific."

INS Satpura is an indigenously designed and built, 6000-tonne guided missile stealth frigate. The ship is a frontline unit of the Eastern Fleet based at Visakhapatnam and is currently on one of the longest deployments by the Indian Navy in the 75th year of India's Independence.

INS Satpura sailed from Darwin, Australia, on September 15, 2022, to participate in sea phase of the Exercise.

The ship participated in various exercises and close quarter manoeuvres with friendly foreign warships and Replenishment at sea.

In addition, aircraft from India, New Zealand, Germany, Singapore and Australia are also participating in the exercise, as per an Indian Navy press release.