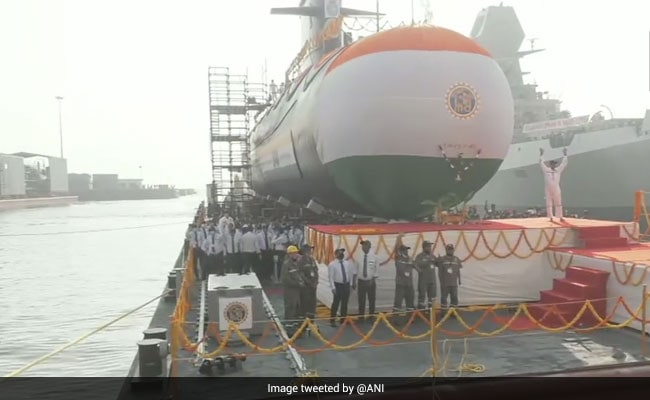 Scorpene submarine INS Vagir is part of the six Kalvari-class submarines being built in India.

Vijaya Naik, wife of Minister of State for Defence Shripad Naik, launched the submarine through video conferencing. The minister was the chief guest at the event and attended it via video link from Goa.

INS Vagir is part of the six Kalvari-class submarines being built in India. The submarines, designed by French naval defence and energy company DCNS, are being built as part of Indian Navy's Project-75.

These submarines can undertake missions like anti-surface warfare, anti-submarine warfare, intelligence gathering, mine laying, and area surveillance, an official said.

Vagir is named after the Sand Fish, a deadly deep sea predator of the Indian Ocean. The first Vagir, a submarine from Russia, was commissioned into the Indian Navy on December 3, 1973, and was decommissioned on June 7, 2001 after almost three decades of service to the nation.

"Building the Scorpene was indeed a challenge for MDL, as the complexity of the simplest of tasks increased exponentially due to all work having to be done in the most congested of spaces," MDL said in a release.

The attack can be launched with both torpedoes and tube launched anti-ship missiles, whilst underwater or on surface, MDL said. "The stealth of this potent platform is enhanced by the special attention to her characteristic underwater signatures. These stealth features give it an invulnerability, unmatched by most submarines," it added.

The submarine is designed to operate in all theatres of operation, showcasing interoperability with other components of a Naval Task Force, MDL said.

"With the launching of Vagir, India further cements its position as a submarine building nation. This is in sync with the current impetus of the government towards Make in India and Atma Nirbhar Bharat," MDL said.

Two submarines of the ongoing Project-75 Scorpene programme at MDL, Kalvari and Khanderi, have been commissioned into the Indian Navy. The third submarine, Karanj, is in the last phase of rigorous sea trials. The fourth Scorpene, Vela, has commenced her sea trials, whilst the sixth and last submarine, Vagsheer, is being readied for boot together.

"Two SSK submarines built by MDL during 1992-94 are in active service, which is a testimony to the professionalism and capability of Mazagon Dock personnel," it said.