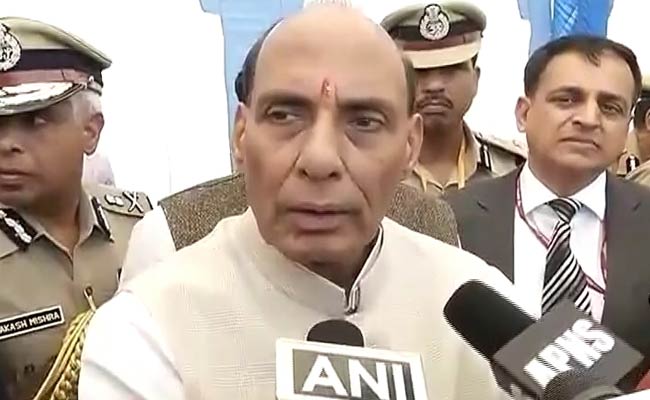 Lucknow: Contending that terrorism should not be associated with any particular religion, Home Minister Rajnath Singh today said Muslims in India are nationalists who have always opposed terrorist elements.

Speaking to reporters in Lucknow after attending an event, he lauded India's Muslims for not allowing fundamentalist groups like ISIS to influence them.

"Muslims in India are nationalists. They have always opposed such (terror) elements. They have opposed and demoralised them," the Union Home Minister said.

Several countries in the world he said are facing the menace of terrorism and they should fight unitedly against it. To a question about Naxalism, Mr Singh said, "though I don't believe in the figures, if one focusses on last 10 to 15 years, then there has been a decline of 20 per cent to 25 per cent in the last one year."

With regard to questions being raised by opposition over Prime Minister Narendra Modi's foreign visits, Mr Singh said that all his predecessors have travelled abroad but the "warm welcome" accorded to Narendra Modi showed that the country's goodwill and prestige is rising.

"The questions being raised over PM's foreign visits are unfortunate. All PMs including Manmohan Singh have undertaken foreign visits," he said.

Promoted
Listen to the latest songs, only on JioSaavn.com
Earlier, addressing the programme organised by Mahamana Madan Mohan Malviya Mission, he said that great personalities should not be associated with any particular party and Mahamana should have been conferred with Bharat Ratna long back for the contribution he made.

He said that for establishing the Banaras Hindu University, Mahamana made an important contribution in linking traditional knowledge with modern science.