Medical Association Writes To PM Modi Over Violence Against Doctors

Health Ministry has drafted the Healthcare Service Personnel and Clinical Establishments (Prohibition of Violence and Damage to Property) Bill, 2019 seeking to punish people who assault on-duty doctors and other healthcare professionals by imprisoning them for up to 10 years or fine of Rs 10 lakh. 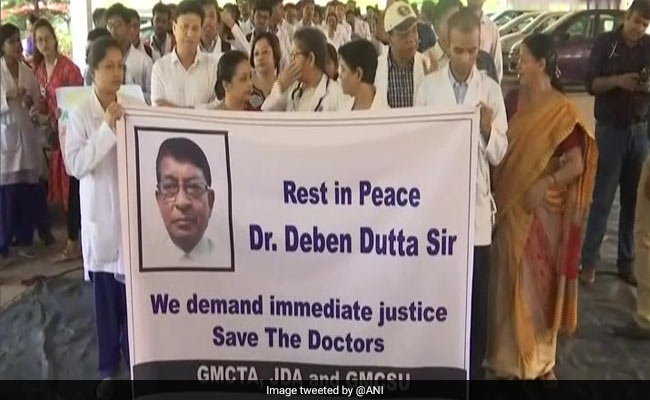 The Indian Medical Association has written to Prime Minister Narendra Modi, underlining the urgent need to enact a Central law to check violence against health professionals and urged him to bring an ordinance in this regard.

The letter comes in the backdrop of protests by the medical fraternity in Assam against the deadly assault on a doctor at a tea garden.

Stating that it was not possible to provide quality treatment to the public in an atmosphere of fear and violence, the IMA, which is the largest body of doctors and students in the country with around three lakh members, in a letter requested Prime Minister Modi to highlight the issue in his monthly radio address to the nation 'Mann Ki Baat'.

The Health Ministry has drafted the Healthcare Service Personnel and Clinical Establishments (Prohibition of Violence and Damage to Property) Bill, 2019 seeking to punish people who assault on-duty doctors and other healthcare professionals by imprisoning them for up to 10 years or fine of Rs 10 lakh.

The draft legislation has been put in the public domain for feedback from the public.

Referring to the death of Dr Deben Dutta in Assam, the WMA in an open letter said, "The news is a matter of great concern to us, reflecting the increasing trend of violence against health professionals in India".

It stated that health professionals are threatened and attacked, sometimes even when they provide life saving emergency care which affects them in the discharge of their duty as well as their physical and moral integrity.

"They can be deliberate targets of violence and used as scapegoat, such as in the case of Dr Dutta. Such violence affects profoundly health professionals in the discharge of their duty as well as their physical and moral integrity, with unavoidable consequences on the provision of healthcare and patients' safety."

"Furthermore, the proliferation of such violence tends to make these acts a common occurrence, instilling mistrust against health professionals," the WMA said in the letter.
The Association stated that it supports doctors at risk worldwide.

"The WMA has been particularly active on these matters over the last decade and stands firm behind its medical associations'' members to protest against any form of violence," it said.

The 73-year-old doctor had succumbed to injuries after being assaulted by relatives of a tea garden worker who died while undergoing treatment at a hospital at Teok Tea Estate in Jorhat district on Saturday.

The IMA in its letter said the Union Ministry of Health has initiated proceedings to draft a central law but the latest unfortunate incident in Assam underlines the urgent need to expedite this process for deterrence.

"IMA requests the government of India to bring out the law as an ordinance in this regard immediately," it said while asserting that a law for deterrence alone might not have the desired impact as "violence on doctors and hospitals is a complex phenomenon and will require multi-dimensional institutional response".

The IMA urged the government to declare hospitals as safe zones with structured security.

Safety and security of hospitals has to be ensured in the interest of the patients. It is not possible to provide quality treatment to public in an atmosphere of fear and violence. Violence in hospitals will only increase the sufferings of the patients, the body said.

The AIIMS Resident Doctors Association has also demanded implementation of the Central Protection Act. Resident doctors also took out a candle light march in the campus expressing solidarity with their protesting counterparts in Assam.