Indian economy to grow at 9-10 per cent from next fiscal: PM 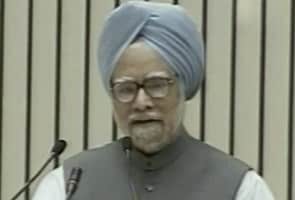 New Delhi: Prime Minister Manmohan Singh has said the Indian economy would record 8.5 per cent growth during the current fiscal and is expected to grow at the rate of 9 to 10 per cent from the next financial year despite the "uncertain" global scenario.

"Despite the uncertain global economic scenario, I am happy that our economic recovery is progressing well," Singh told the congregation of about 1,500 members of the Indian diaspora who have converged here from across the world for the three-day annual event.

"In the last two quarters, our growth rate has been 8.9 per cent and we expect that for the entire year, it will be around 8.5 per cent," he said, adding, "We expect that from the next year onwards we will be able to grow at a rate between 9 and 10 per cent."

The Prime Minister told the NRIs and Persons of Indian Origin (PIOs) from 51 countries, including businessmen, economists and scientists, that the Indian diaspora should have deeper engagement in the country's development process.

He particularly asked them to share their expertise and experience in improving educational infrastructure here.

"We hope to use the wisdom, experience and resources of the global Indian community to develop a world class education system, particularly in higher education," he said.
Comments
India economyPrime MinisterPravasi Bharatiya Divas