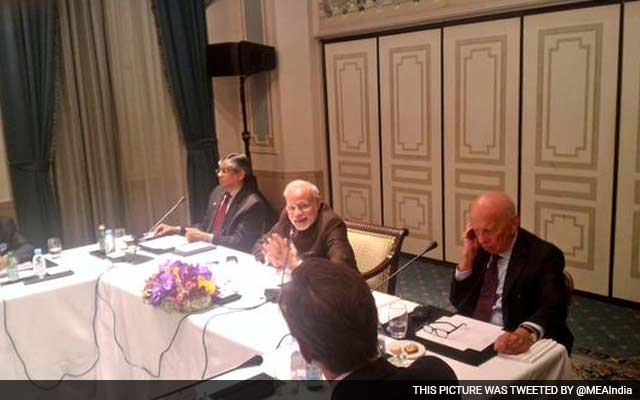 New York: India is committed to protecting Intellectual Property Rights - a subject on which US and India differ -- Prime Minister Narendra Modi told a group of media sector heads in New York today.

In May, the US had kept India and China on its Priority Watch List of trading partners that fail to protect intellectual property rights of its enterprises that invest in India, hurting the economy.

US firms contend that India has lax rules on intellectual property rights -- especially in the pharmaceutical sector and the piracy of films and software.

India maintains it complies with the global IPR rules under the Trade-Related Aspects of Intellectual Property Rights Agreement of the World Trade Organisation.

But the administration led by President Obama had been hopeful of improvement in India's approach to IPR after the Narendra Modi government - seen as business friendly - had taken office. The issue had figured in the discussion at the India-US CEO Forum during President Obama's visit to India -- which both he and PM Modi had attended.

The session with media heads -- a round table on technology and communications -- focused on leveraging India's growth story.

During the session, coordinated by Rupert Murdoch's News Corporation, the Prime Minister met the top executives of News Corp, 21st Century Fox, Sony, Discovery, Time Warner and other media houses to discuss the latest trends in the field and opportunities with regard to India.

"Expanding the bandwidth for Brand India... 40 per cent of the world's entertainment industry in one room!," tweeted External Affairs Ministry spokesman Vikas Swarup as the meeting started.

During the 5-day visit, PM Modi will attend the United Nations General Assembly session in New York before he heads to the West Coast. He will also meet President Obama.