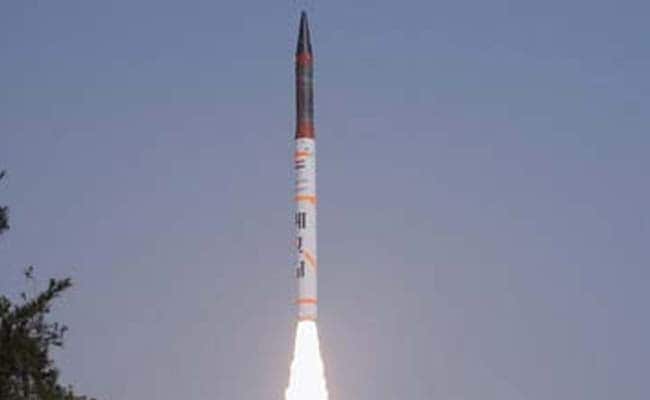 The Agni-IV is successfully test- fired from a test range off the Odisha coast. (Press Trust of India photo)

The missile, which is about 20 metres tall and weighs 17 tons, was flight tested from the launch complex-4 of Integrated Test Range (ITR) at Abdul Kalam Island, formerly known as Wheeler Island, at about 9.45 am, defence sources said.

The launch was spearheaded by India's missile woman Ms. Tessy Thomas. This was the fifth trial of the Agni IV missile. This fire and forget missile is navigated using a jam proof ring laser gyroscope.

According to the Ministry of Defence, it has "met all objectives as monitored and confirmed by the telemetry" and ships located in the down range monitored the "terminal event" which is the explosion of the dummy warhead.

India already has battery of nuclear capable missile like, the Agni series, Prithvi series and the Submarine Launched Ballistic Missile.

"The sophisticated surface-to-surface missile is equipped with modern and compact avionics to provide high level of reliability," sources in Defence Research and Development Organisation (DRDO) said.

Agni-IV missile is equipped with 5th generation onboard computer and distributed architecture. It has the latest features to correct and guide itself for in-flight disturbances, they said.

This was the fifth trial of Agni-IV missile. The last trial conducted by SFC of the army on December 2, 2014 was successful.