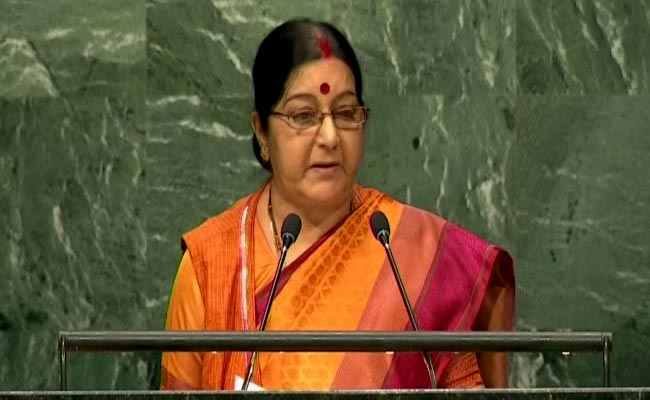 India has today asked for investigations into North Korea's nuclear proliferation linkages and said those responsible for it must be held responsible, in a veiled reference to Pakistan.

External Affairs Minister Sushma Swaraj made the assertion during her trilateral meeting with US Secretary of State Rex Tillerson and her Japanese counterpart Taro Kono on Monday, on the sidelines of the ongoing United Nations General Assembly session in New York. Her remarks came days after North Korea fired another mid-range ballistic missile over Japan on Friday. On September 3, North Korea had conducted its sixth and most powerful nuclear test in direct defiance of United Nations sanctions and other international pressure.

Without naming Pakistan, the foreign ministry spokesperson said, "I think I am giving you enough material to try to figure out what we are talking about."

Last week, India had said at the United Nations that nuclear proliferation linkages active today have clear "Pakistan fingerprints" and an "unbridled' expansion of fissile material under the nexus between state and non-state actors constitutes the biggest threat to peace.

The leaders of the three countries - India, Japan and the US - also emphasised on the need for ensuring freedom of navigation, respect for international law and peaceful resolution of disputes, as they held a trilateral meeting in the backdrop of Doklam crisis and assertive Chinese behaviour.

"Three broad issues were discussed -- maritime security connectivity and proliferation. We have spelled out what these heads mean on security, the ministers emphasised the need to ensure freedom of navigation respect for international law and peaceful resolution of disputes," Mr Kumar said.

India and China last month ended a 73-day standoff in Doklam area of the Sikkim sector that was triggered by China's move to build a road in the border area. The road would have been a serious security issue because it would give Beijing access to the so-called Chicken's Neck, a narrow piece of land linking mainland India with its seven north-eastern states.

China is also engaged in hotly contested territorial disputes in both the South China Sea and the East China Sea. Beijing has built up and militarised many of the islands and reefs it controls in the region. China claims sovereignty over all of South China Sea. However, Vietnam, Malaysia, the Philippines, Brunei and Taiwan have counter claims.

Promoted
Listen to the latest songs, only on JioSaavn.com
Ms Swaraj, who arrived in New York on Sunday to attend the 72nd annual session of the UN General Assembly, is scheduled to address the United Nations on September 23.

Take A Ride In Delhi's Electric Bus, Share A Selfie And Win...