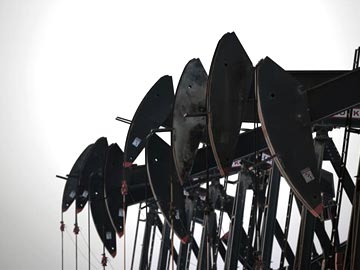 FILE - In this Wednesday, Sept. 11, 2013, oil pumps work in the desert oil fields of Sakhir, Bahrain

New Delhi: Indian refiners are ready to start transferring cash owed for Iranian oil as early as next week following a landmark deal to curb Tehran's nuclear programme that allows importers to shift billions of dollars back to Iran.

World powers agreed on Sunday to ease some of the sanctions they had imposed to force Iran to halt its nuclear programme. The measures have slashed the OPEC member's exports by more than half and cost it as much as $80 billion in lost oil sales since the beginning of 2012, the White House estimates.

Since February, sanctions have prevented Iran from repatriating cash earned from the oil it has been able to export, crippling its economy by choking off its biggest revenue stream.

The new agreement would allow Iran to receive about $4.2 billion in oil money from accounts held abroad if it fulfills commitments under the deal over the next six months. Iran's biggest oil buyers are China, India, South Korea and Japan.

India is Iran's second-largest buyer and now owes Tehran about $5.3 billion for oil imports, according to government and refining sources.

India's refiners in mid-October received a request by the National Iranian Oil Company (NIOC) to settle some of those dues in euros via Turkey's state-run bank Halkbank as soon as possible. The refiners had used that payment route until February, when it was blocked by sanctions.

"Next week, if it is possible, we will start making our payments," said P.P. Upadhya, managing director of Mangalore Refinery and Petrochemicals Ltd, one of Indian buyers of Iranian crude.

A government official also said that payments would be expedited once the payment mechanism via Turkey opens up.

"If that Halkbank route opens up ... rather than pushing this to a later date perhaps this money will go to the Iranians sooner rather than later," said the official with direct knowledge of the matter.

The United States had in February asked Iran's oil buyers to stop transferring payments to Tehran, and instead keep the money in bank accounts in the currency of the importing countries.

Iran was only able to use that money to buy goods and services from the importing country. The cash in the accounts has quickly risen.

It is unclear how much Iran will receive from each country over the next six months under the terms of the deal. Banking and industry sources in South Korea and Japan said they were awaiting details of the weekend agreement before they can decide on how to transfer money to Iran.

South Korea has $5.56 billion stuck in bank accounts, with a similar amount held up in Japan since the beginning of the year, according to sources.

In China, Kunlun Bank, owned by China National Petroleum Corp, holds the Iranian oil dues, but it was not immediately clear how much is locked up.

The weekend agreement freezes U.S. plans for deeper cuts to Iranian oil exports, but does not allow any extra Iranian oil into the market. That means shipments from the OPEC member will hold around 1 million barrels per day, versus the pre-sanctions level of around 2.5 million bpd.

That ceiling means Iran has very little room to boost sales, given that its oil exports in the first nine months of the year have averaged about 1.08 million bpd, according to Reuters data.

Iranian exports were also hit by EU sanctions that barred any company based in the region from dealing with Iran. That hit global the reinsurance industry, which is mostly all based in the region, halting coverage on tankers carrying Iranian oil.

Earlier this year, Indian insurers told refineries that plants, ports and pipes would not be covered if they use Iranian oil. But the recent measures lift some of those sanctions, and that may help smooth crude exports to its Asian customers.

Up until now, buyers of Iranian oil had to show a continuous reduction in purchases to qualify for a six-monthly waiver for U.S. sanctions. The next review for most of the buyers is due soon.

Promoted
Listen to the latest songs, only on JioSaavn.com
A rapid increase in output from rival Iraq has meant that the market is well supplied despite the fall in Iranian exports and prolonged outages in Libya.